GOING TO THE PICTURES 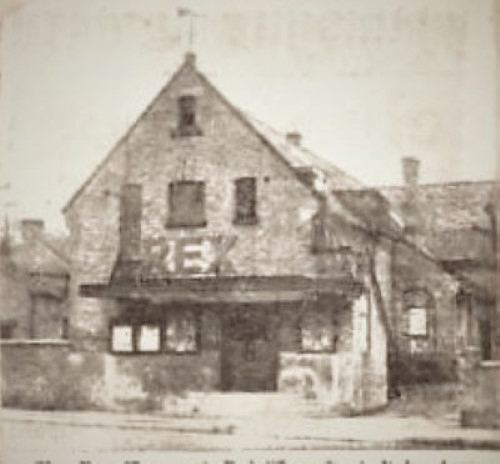 The old schoolroom was built by the Manvers Estate in 1876 and vacated by the schoolchildren in 1909.   The disused building was handed over by Lord Manvers at a peppercorn rent of one shilling.  for use as the Pierrepont Institute, a centre of social and intellectual enjoyment for the whole community.  It was opened to all Radcliffe residents without distinction of sex, age, creed or politics, and if public meetings were to be held there at all, they were to be equally available for all shades of political or religious opinion. But on Sundays it was where the children attended Sunday School. This was the building that became known as The New Kinema, converted and opened first by T F Webster (who lived on Bingham Road) and A C Hutton. Nottinghamshire County Council had approved the opening of a cinema in February 1930. In January 1939 a new company was formed called Rex Cinema (Radcliffe) Ltd with a capital of £8000 to carry on the business of proprietors and managers of cinemas, theatres, music and variety halls with four permanent directors (none of them were local to the village). In November of that same year Mr William A Sleath, the new manager applied for conversion of the building; he wanted to create a new entrance with concrete steps, a new pay-box with a counter, glass screen and decoration. He also advertised in the local paper for a cashier and usherette.  The council approved the plans and work commenced early 1940.  Mr Sleath also ran cinemas in Pilsley, Clipstone, Riddings and Whitwell. The cinema was now called The Rex.

The cinema thrived during the Second World War, serving local people, forces billeted nearby and evacuees with thrice-weekly changes of programme and popular Saturday matinees.   At the beginning of the war it added to its role, as a morale booster for the Home Front by becoming a Health and Billeting Centre for the country’s evacuees.

During the 1940s the cinema was burgled on a couple of occasions, once by a local lad and the second time by a man from Nottingham. Fortunately only small amounts of cash and minor items e.g. an electric torch and a cycle lamp were taken. 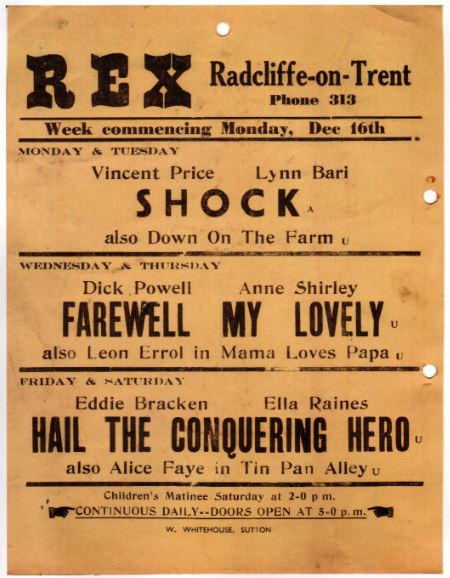 Admission for adults was 6d and 3d.  Each programme was in two halves, with usually a short film (B movie perhaps), cartoon, trailers for forthcoming films and the all important news before the interval, then followed the main film. The children were required to queue outside for the Saturday matinee shows and were only allowed in minutes before the show started.  Projection break-downs would often bring catcalls and a general rowdiness.  Even the children from Shelford would come to Radcliffe for the treat of seeing a film, being brought here on the butcher’s horse-drawn delivery dray.   The screen was high up (where the stage was to be eventually built) and the floor was raked, sloping down towards it.  The usherette sold ice-cream from a tray slung round her neck in the interval. One resident remembered that on the back row there were double seats for courting couples. By the early 1950s Hollywood extravaganzas such as ‘Tarzan and the Elephant Boy’ and the dramatic ‘The African Queen’ could be seen for 1s.6d or 2s.9d. 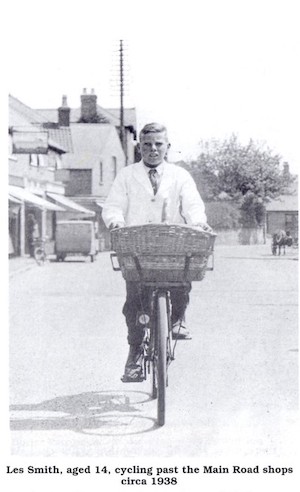 Mr Sleath eventually moved to the village, living on Main Road but the projectionist lived at Gamston and would cycle here for work. His assistant was a local lad, Les Smith, whose main job was labouring at Lees Barn Farm.  In the projectionist’s booth there were two Kodak Kalee projectors which ran on carbon rod arc lamps, each loaded with two reels of a feature film and there was great skill involved in bringing the second into play ‘seamlessly’ showing no gaps between reels.  Flo Smith was the cashier/ticket lady and sometime usherette.  Bob Flower, a local resident, remembers fondly the matinee showings for the kids with films such as Old Mother Riley, Roy Rogers and his horse Trigger, Abbot and Costello and The Mark Of Zorro (Z). Children would get a sausage roll from Clifford Parr the butcher, or a hot bap from the Lantern Creamery to eat at the interval but they never lasted that long! Tubs of Eldorado ice cream came on a tray at the interval. Bob also recalls that he joined the projection team in 1949 with his pal Mick Hill, son of the nursery owner at the Harlequin. ‘Mr Sleath taught us the basics of film threading, arc lamp adjusting, projector changeover etc. sometimes, but not very often, we broke down. If this happened on a Saturday daytime, when the kids were in, all sorts of abuse and missiles, like orange peel and ice cream cartons, were hurled at the peep hole in the projection room!’

The main requirement of a projectionist is concentration. Bob remembered once showing a film called ‘One Piece Bathing Suit’ with Esther Williams. She was beautiful and, as his mother would say, would fetch ducks off a pond! ‘I, in some sixteen year old hormonal fantasy, was looking through the peep hole at her and forgot all about the change spots. The film ran through the projector to eventually show a white screen. Mr Sleath was less than pleased!’

On Tuesday 9 May 1950 the following article appeared in The Nottingham Journal under the heading of: –

The Rex (seating 220) – and the adjoining hall (seating 120) have been bought for £3,500 by the Parochial Church Council.  So far £2000 has been received and it is hoped to raise a further £3000 (including £500 for refurnishing and adaptation) by September, when the church council will take possession of the buildings. The purchase includes the modern projector, screen and all other equipment.  The cinema under present plans will be available for hiring on two nights in the week for ordinary cinema shows.  On other nights the cinema will be used for church or village activities, and it is proposed to develop the showing of religious and educational films under the auspices of the church.  It is proposed to make the adjoining hall, which has been leased by the church council since 1945, into a permanent youth centre for the village, under church guidance.

The cinema was owned by Mr W A Sleath and serves surrounding villages as well as Radcliffe.

Archdeacon Phillips told the ‘Journal’ yesterday that he sees big possibilities in the development. ‘Detailed plans have not yet been worked out,’ he said.  ‘The scheme will give not merely a church hall, which we do not possess at present, but a centre which can be used as a village hall and as a social centre for the village.  We have no definite plans about films but, having the equipment there, we would want to develop that side as far as it is possible.  It is likely that the cinema would be in continual use for various purposes.’

A comment from the Nottingham Evening Post dated 8 May 1950 stated that ‘ If the building continues to be used as a cinema it is likely that 16mm films will be used in place of the standard 35mm.  This change will be necessitated by the regulations governing seating, which are different for the standard films and the sub-standard.’ 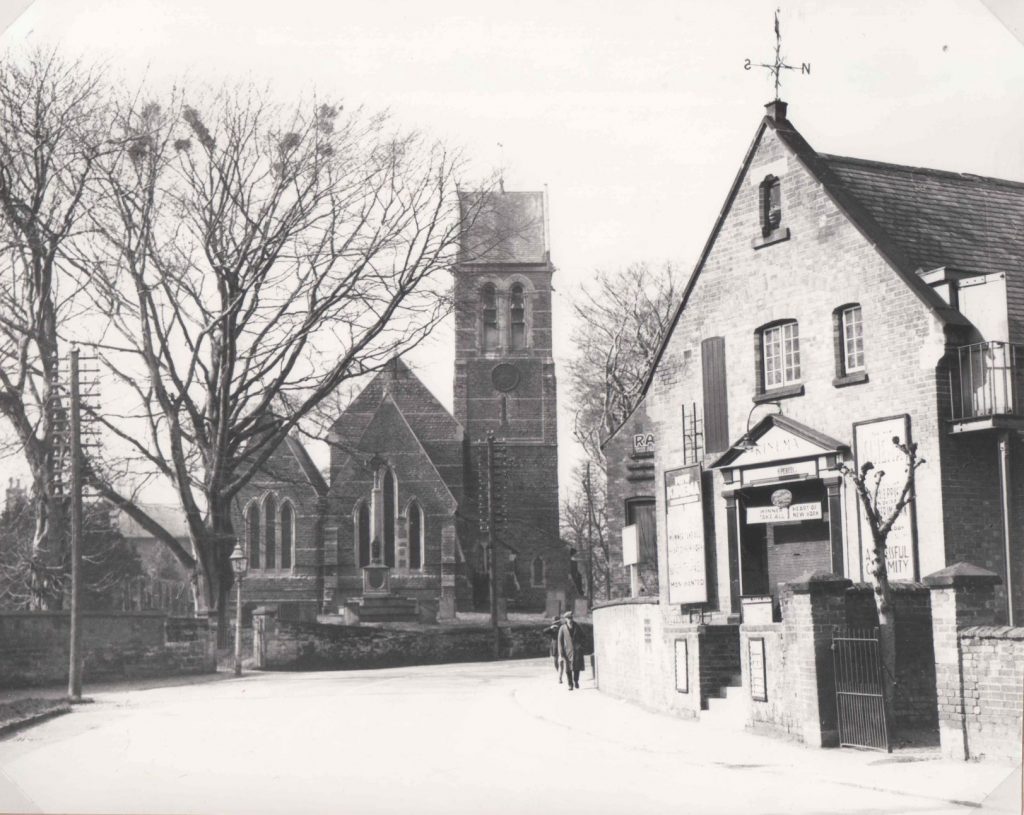 Films continued to be shown until the 1960s on Wednesday and Saturday evenings, however it continued to house many events notably on 15 March 1950 the Amersham Mobile Theatre performed ‘Dick Whittington’ and ‘Where the Centuries Meet’ to 100 schoolchildren and three of their teachers. Saturday night dances were also held here and on Sundays the Silver Band played.

Eventually the Rex closed and the building reverted back to being a church/village hall.  The cinema seats were removed, a stage was built which enabled many different events to be held including excellent productions by the Radcliffe Drama Group. Many societies and clubs used the premises, guides, drama, dance classes and pantomimes (organised by Lady Ann Prior), coffee mornings, art exhibitions and many more. The whole building (L shaped) was put up for sale and it was due to be demolished to make way for a housing development. However it was bought by a graphic design company in 2006 and it has been very sympathetically transformed. A new church hall on the opposite side of the road was built and opened in 2008. 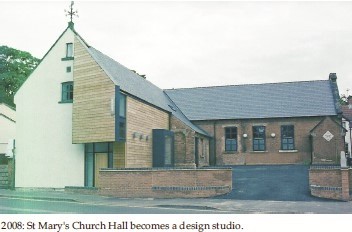