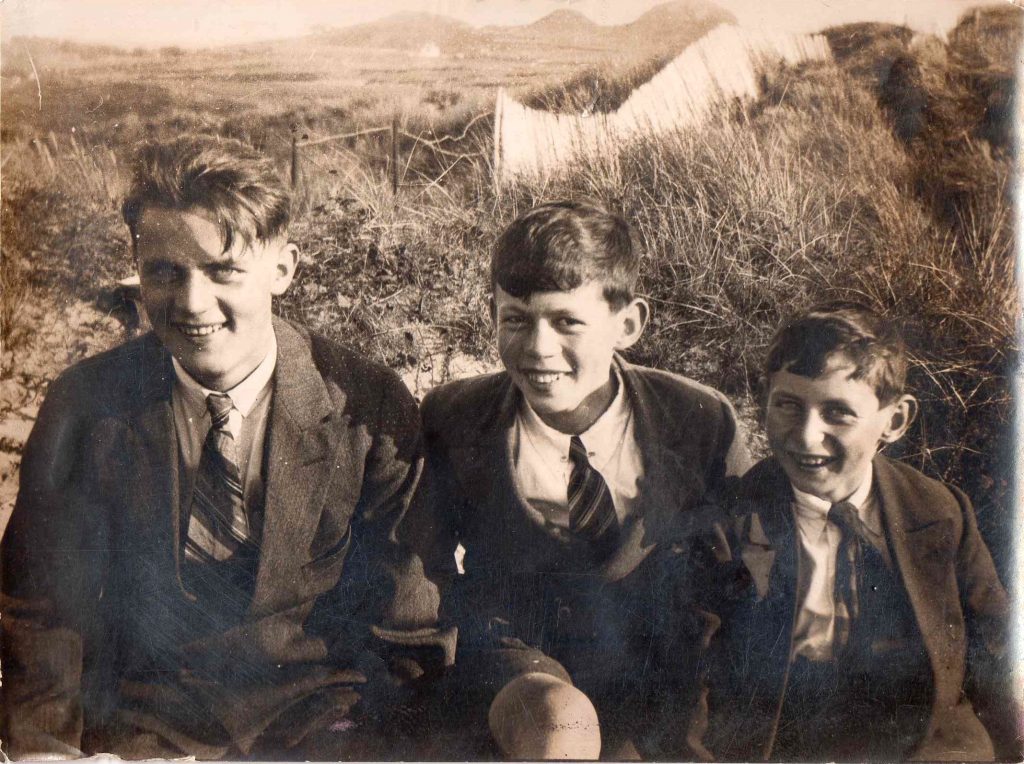 Alvyn Taylor was born on 25th August 1919 in the room behind his parents drapery shop, Harold Taylor, on Main Road in the village. He had two brothers Frances Eric, known as Eric, (born 1913) and Edwin Ralph, known as Ralph, (born 1915).  He attended the village school and then in 1930 he moved to Musters Road Boys school after passing the entrance examination. On leaving school he worked for National Provincial Assurance Company in Nottingham but when war was declared he joined the Royal Marines.  When he returned from the war he began working with his mother, Annie, in the shop. 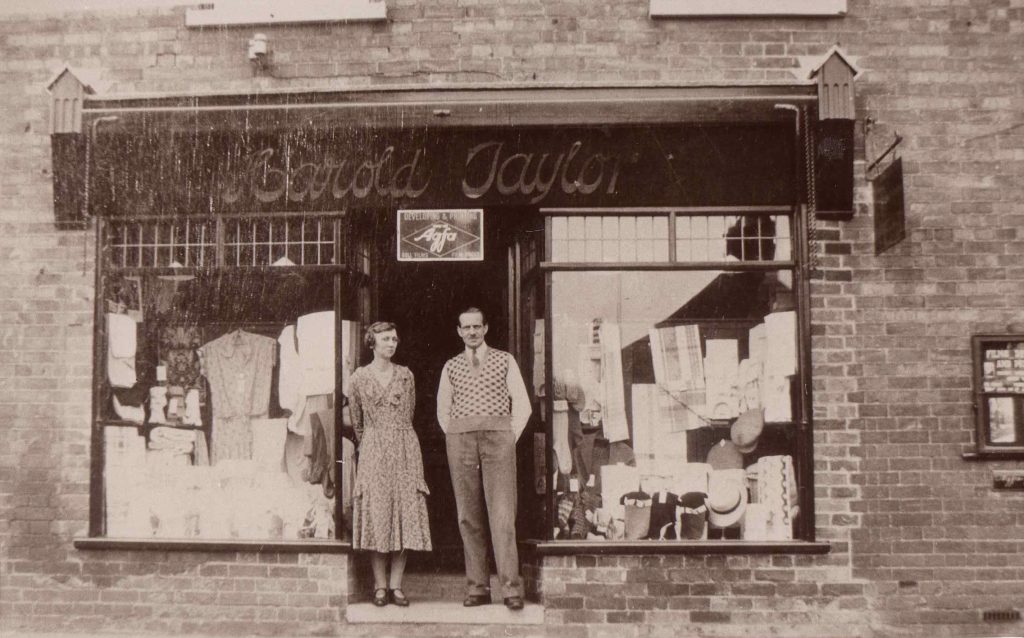 He met his wife Helen in 1946 at the Palais de Dance in Nottingham. She was in the ATS at Chilwell, and after she was demobbed she returned home to Troon in Scotland, where they married in 1947.  They began married life living above the shop on Main Road.  Their son Brian was born in 1952 and daughter Valerie in 1958.  The family had moved to Johns Road in 1954. Alvyn continued to run the shop for many years.

Alvyn took part in many activities in the village, playing cricket and then becoming secretary, chairman  and president of the club.  He was also a governor at Dayncourt School and  became a parish councillor in 1976, and was chairman of the council during 1989-1992.  He was a borough councillor for Rushcliffe, where he also was chairman of the Planning Committee.  In 1986-87 he became Mayor.

Alvyn’s family donated a bench at the end of New Road in his memory.

The inscription reads: “Alvyn Taylor 1919-2002 who lived in, loved and served Radcliffe all his life” 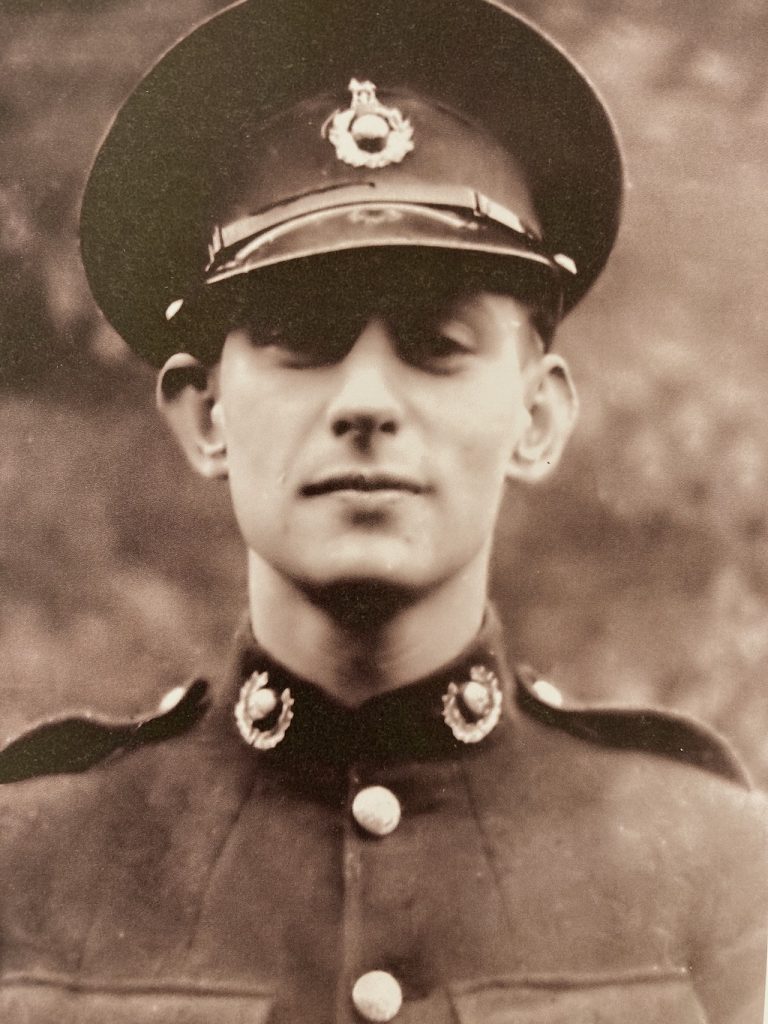 “The daily entries in the small grey pocket diary – bought for 10 cigarettes from a German guard – are starting to fade after 53 years.

But those harsh wartime memories – recorded in pencil under appalling conditions – remain as sharp as ever for Alvyn Taylor.

At 78, he distains fuss or publicity.

He was persuaded to tell his wartime story with great reluctance.

Fortunately, a copy of his precious diary is now preserved for posterity at the Royal Marines Museum in Portsmouth.

Alvyn, who was born in 1919 in Main Road, Radcliffe on Trent – above his father’s drapery shop – joined the Royal Marines early in 1940 as a fit young man, who was well over 6 feet tall.

During the battle for Crete, Corporal Taylor of S battery was taken prisoner of war by the Germans.  After being held on Crete for about three months, he was taken by sea to Salonika and then transported by cattle truck to the grim Stalag 8B prisoner of war camp at Lamsdorf in South Poland. 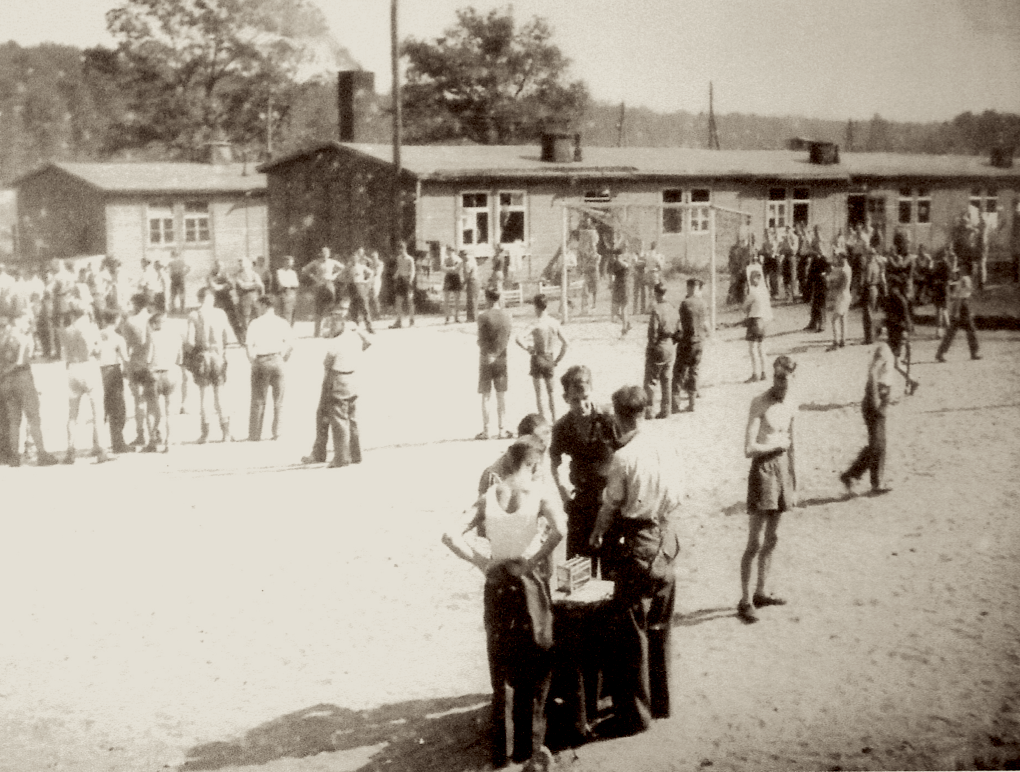 He was platoon commander of 18 to 20 marines who were detailed for work on the railways at Leban (?).

As an NCO he could have been excused from the gruelling shifts – but he volunteered so that he could stay with his men.

The work lasted for about a year when the platoon was sent to work at the Herman Goering coal mine at Gleiwitz.

On returning to Stalag 8B camp, he traded 10 cigarettes for the small pocket diary and started on January 1, 1945 to keep a daily diary of what he hoped would be his final year in captivity.

That month, as the Russians and Americans advanced strongly, he was among hundreds of British POWs forced by their German guards on a 540-mile march that was destined to last 79 days.

They travelled westwards, sleeping rough and scrounging what food they could en route.  Towards the end of the arduous trek, in which many colleagues died, Alvyn managed to escape.

He and his two pals slipped away from the column of walkers and dashed into a nearby wood. Alvyn recalled:  “We hid for two or three hours when we heard a noise.  Two German guards, both armed with rifles, had found us.  To our astonishment they asked to escape with us.  So we took away their ammunition and walked to a nearby village, where we were released by Americans troops. The two Germans were just as happy to be taken prisoner as we were to be released.”

His four year ordeal was over when he returned to England and the arms of his mother and father at Radcliffe railway station.

Alvyn’s weight was down to 7 ½ stone.

But he recalled:  “I was a thin weedy character.  I often said that the reason I survived was willpower rather than physical capabilities.  Men who were stronger and more athletic than I was fell by the wayside.  But something kept me going.  Sadly, I have not seen any of my comrades who walked all the way with me.”

On return to the UK he went into the family business and found great happiness with his wife Helen.

He went into local politics, was a senior member of Rushcliffe Council for many years and was the borough mayor in 1986/7.  He continues to be active in the community and still serves as a member of Radcliffe Parish Council.

Because space was so precious the diary was compiled in tiny handwriting.

He said: “ I am delighted that Alvyn agreed that a copy of this important historical record should be placed in the archives of the Royal Marines.” 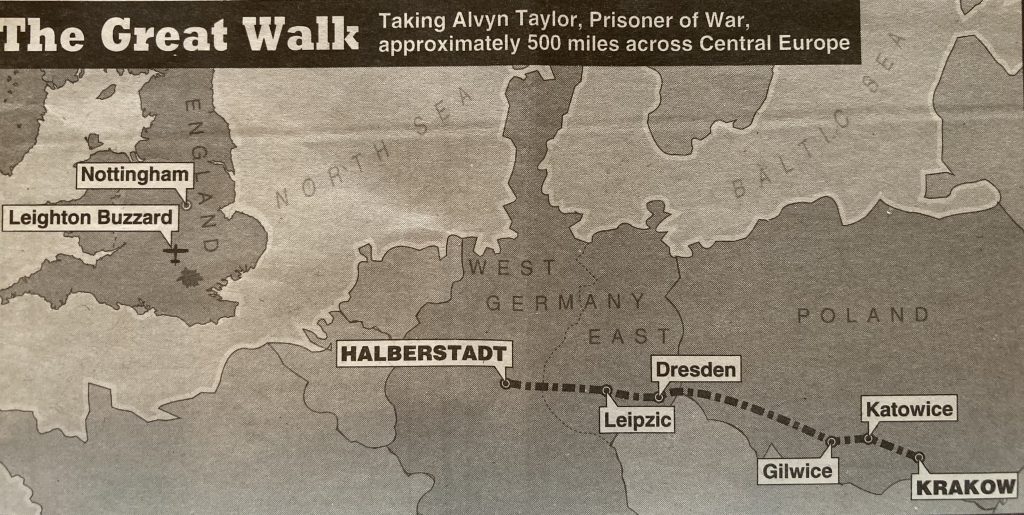 Excerpts from the Diary

Outside the camp, we were each given a Christmas parcel, 50 cigarettes, half a loaf and a little marg.

Jack had made a sledge which we shall take turns in pulling.  Did approximately 23 km.

Spent evening in a barn. Cold as charity. Frozen stiff. No room. 500 men in one small barn.

Today was really bad.  We walked and walked until we were fit to drop.  We are like worn out to machines  – ready to conk out at any minute.  Is it worth it?

Only thought of home has kept me going.

My heels are very swollen and it is hard going. Glad to see Gorlitz camp and march into what we hope would be a reasonable billet.  Bitterly disillusioned. 500 men in one barracks.

We are now living absolutely on German  rations –  one sixth of a loaf, a cup of soup, which is more like coloured water, and 2 cups of either mint tea or ersatz coffee a day.

Met a Radcliffe chap named Bryant today – a stranger to me but it was good to meet a Towney.

This existence is now having a real effect on the men.  They are hungry, angry and desperate.  We are continually passing our boys who have collapsed on the roadside.  Only determination is keeping us going.  Blackouts, dysentry and diarrhea are common complaints. 634 km so far.  Have spent the last hour sorting out the corn from the heads of wheat.  They are eatable at any rate.  We eat anything that we can get.  Sugar beet, corn, cabbage stalks. Onions are dived on whenever it is possible.  We are literally longing for the end of it all.  We are worn out mentally and physically.

We are dirty and many are lousy.  We have had no chance of a wash for nearly a week.  We are refused to get water to drink.  No hot drink for two days.  Bitterly cold for three days now.  Snow and strong winds.

We were seriously troubled by rats in the night.  Rations cut further 3/13 of a loaf and 1 ounce cheese. Soon we shall be marching on nothing.

Had a feed of spuds, meat and gravy and a sandwich.  Also got some salt which is very precious.

But it is pitiful to see the state 90% of us.  Terribly thin, weak and exhausted. Deaths are frequent and we begin to wonder when our turn will come.

From morning to night we talk of food.  This passes the time but makes us more hungry and morbid.

Last night I dreamt all the time of a new white loaf with butter and jam and a plain suet pudding smothered in Lyles Golden syrup.

All the day through my thoughts are of home and mother and dad, of past pleasures then unappreciated and of future plans and intentions.

Arrived at Halberstadt.  The civvies in Gossler last night were very generous and friendly and confident that the war will be over in a few weeks.

Our party of 250 men held up till last and  we’re not given any rations as to the others.

We are marched away and as we passed a wood we made our break.

We kept quiet for two or three hours and then make our way back to this village.  We were accompanied by two German guards who had also escaped.

We landed up in a French POW camp where we were fed and made welcome.

At 2:30 an American army car entered the village.  Shook hands with the driver and had a cigar.  He said we were free men and we’re all excited. It was a day I will not forget.

The morning of freedom and what a breakfast.  Two fried eggs, chips, onions, omelette, ham, bread and syrup.

My last entry in this diary.  Left Germany by plane at 8:45 pm and arrived Leighton Buzzard at 12:30 am. 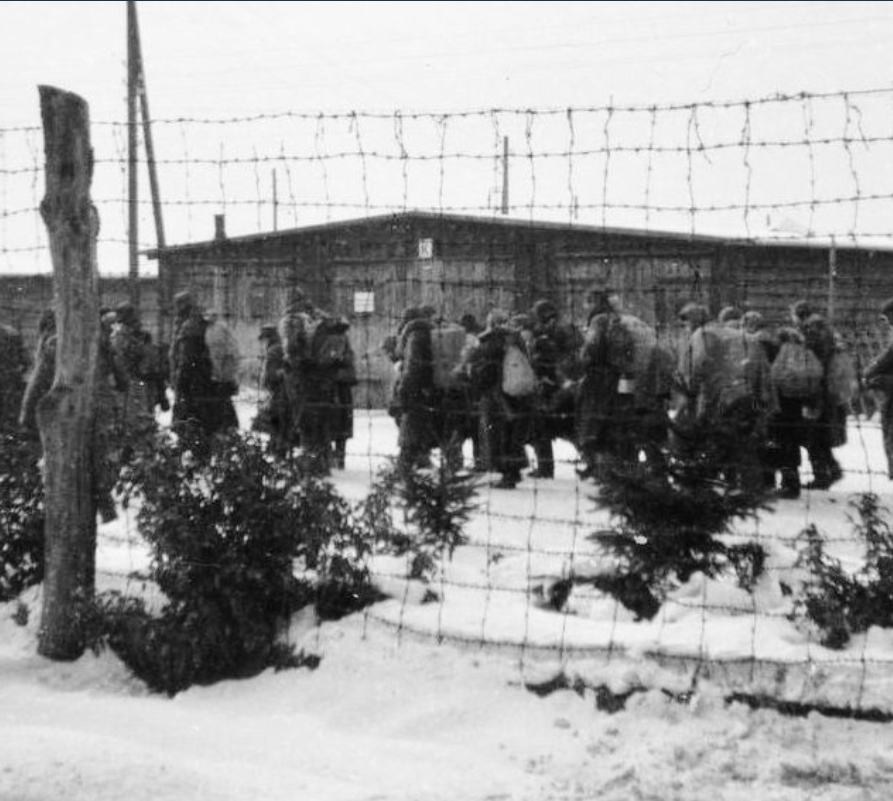 Photograph taken on 22nd January 1945 of men about to leave Stalag VIIIB
www.lamsdorflongmarch.com