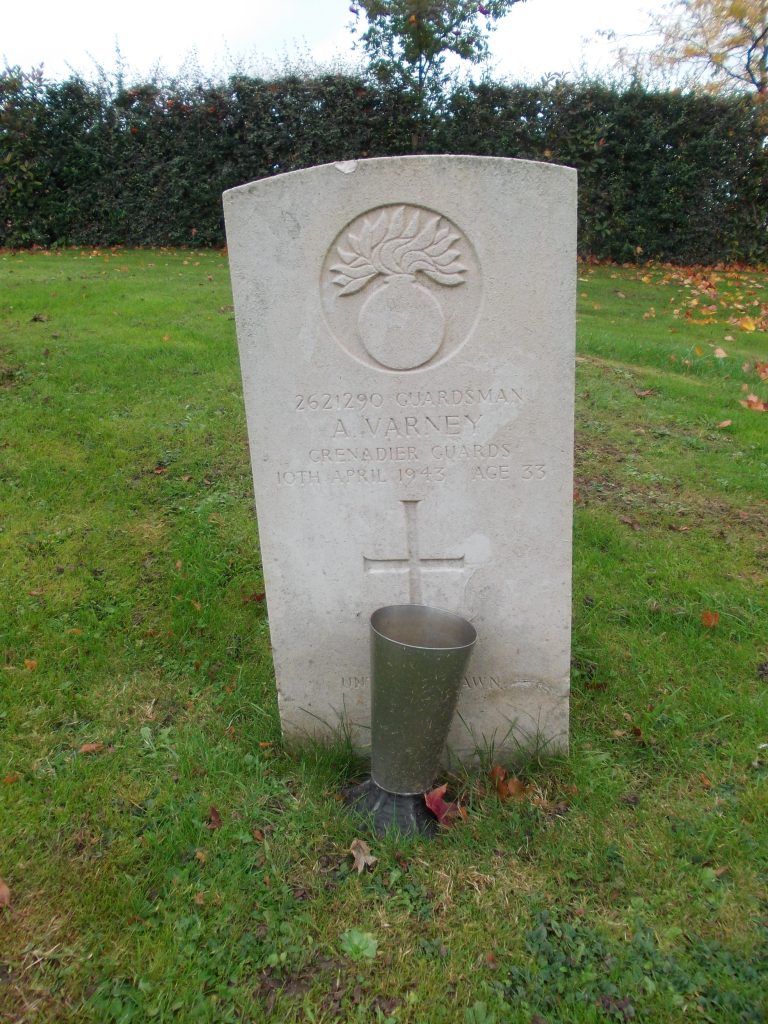 In 1911 Bertie was a stableman in a racing stables, living at 4 Grafton Street, Moodys Cottages, Newmarket with his wife and family. They had moved to Radcliffe before 1913.  Bertie served in  the Army Service Corps Remount Squadron. In 1939 the family were living on Thraves Yard.

In 1935 the family had suffered a tragedy when Bessie Varney’s son Anthony Michael Varney was drowned in the River Trent at Radcliffe.

Arthur Varney enlisted in September 1940 in the Grenadier Guards, Service no 2621290.

The newspapers published the result of his inquest in Aril 1943.

On the night that he should have returned to his unit after being on leave, Grenadier Guardsman Arthur Varney, 33, booked a room in a hostel in Chilworth-street, Paddington, and shot himself through the head with his service rifle. His father, Mr. Bertie Varney, a market gardener, of Lamcote Corner, Radcliffe-on-Trent, said at the Hammersmith inquest to-day that his son, a single man, joined the Army in September, 1940. He seemed to be very happy in the Service, and when he came home on leave on March 31st he was happier than ever.’ He (the father) saw him off by bus on April 9th. His son had no unhappy love affair or financial trouble to his knowledge. Major G. P. Phillips said  Varney, who was his batman, was a tireless worker, and that there was nothing but good in his record. He was an exemplary soldier. Evidence was given that when he arrived at the hostel Guardsman Varney appeared to have had a fair amount of drink, and spoke in a nonsensical manner. A police inspector said that the muzzle of the rifle was lying in the bed just under his arm. Dr. John Taylor, pathologist, said there was a bullet wound in the right side of the head. The injury could have been self-inflicted. The body was that of a healthy man. The coroner (Mr. N. Stafford) recorded a verdict that Varney took his life while the balance of his mind was disturbed.

Arthur was buried in Radcliffe on Trent cemetery in a Commonwealth War Grave but was not remembered on the War Memorial.