and its impact on Radcliffe on Trent 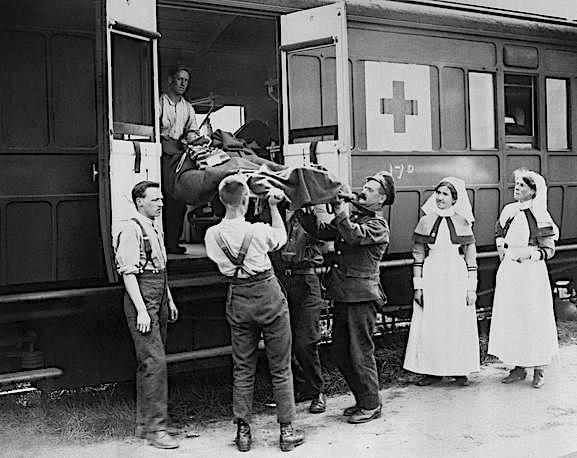 The coronavirus (COVID-19) is currently causing much anxiety around the world. At present (as of 4 March 2020) it is unclear whether its spread can be contained or whether it will escalate into a global pandemic. It may reach epic proportions, possibly as widespread as the influenza pandemic of 1918—1919, which killed between 50 and 100 million people world-wide, far more than the appalling numbers of war deaths. Many soldiers who survived the horrors of war succumbed to the deadly virus. Half of the 100,000 soldiers from the U.S.A. who died as a result of the war were flu victims. Global risk to civilians was very high. Recent estimates suggest around 174,000 influenza deaths in Great Britain alone between 1918 and 1919.

Why was there a flu pandemic and what are the parallels with the COVID-19 outbreak?

The outbreak of COVID-19 began in a live-animal market in Wuhan, China; dozens of workers were affected. It appears to have jumped from animals to humans but the specific source has not yet been identified (Nature 26 February 2020). Separate teams of Chinese scientists are working to identify the host with certain mammalian species being the principal suspects (researchers are investigating pangolins and bats among other species) but the origin of the virus remains unconfirmed. The source of the flu pandemic also remains controversial. British virologist Professor John Oxford argues that it was directly related to war conditions. The huge British base camp at Étaples, 25km south of Boulogne, may have been a focal point. The typical population was 100,000 with over a million passing through between 1916 and 1918. Very sick soldiers arrived daily at base hospitals Number 23 and 24.  Men in transit from all over the Empire experienced overcrowding including close proximity to poultry, pigs and the hospitals. This would have facilitated the transfer of the flu virus from animals to humans.

Genetic analysis of samples recovered from flu victims indicates the 1918 virus is similar to viruses commonly found in birds. Étaples provided ideal conditions for the virus to transfer from poultry to pigs and then to humans and for spreading the infection from the sick to the healthy. These conditions were also present in French and German bases across the Western Front. Men suffering from “purulent bronchitis” with symptoms very similar to influenza were seen in Étaples in 1916. Were these early cases? 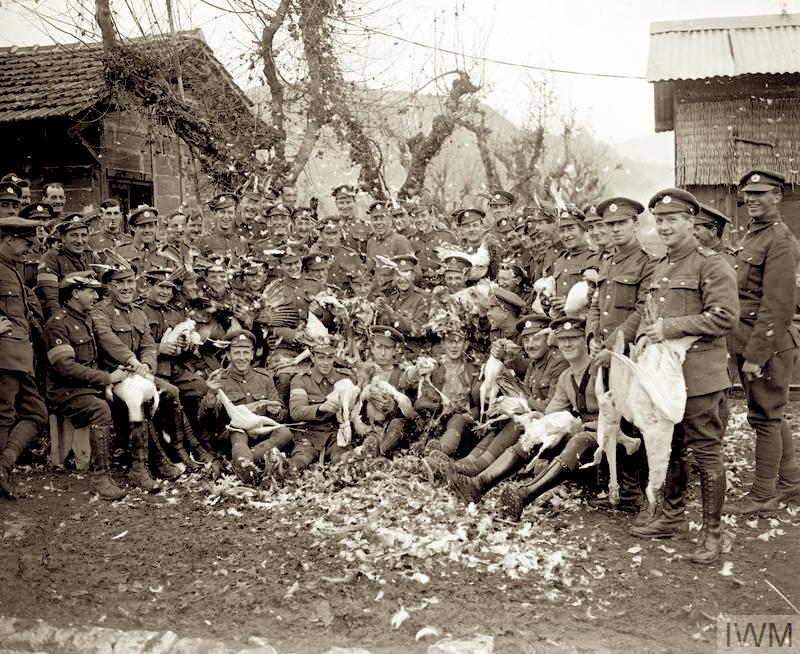 Why was it so deadly?

There is no advantage to a virus in killing its host and flu usually becomes less virulent as a pandemic progresses. In peace time the less severe flu strains tend to spread more quickly, through coughing and sneezing, because affected people often go outside their homes. Sufferers from severe strains tend to remain ill at home, resulting in fewer possibilities for contagion. The evolution of flu is generally in the direction of lower virulence.

War conditions in 1914–1918 were different. Soldiers had to remain at their posts unless they were very ill. Then they were evacuated to crowded base hospitals like Étaples. The severe flu strains were therefore more likely to be spread, accounting for evolution in the direction of greater virulence. Soldiers were significant carriers of the flu because of massive troop movements across the world. The flu virus could have been in circulation for some time before the pandemic became obvious in 1918.

When did flu become widespread in the UK?

The first wave, with relatively low mortality, was in the spring and early summer of 1918. It was prevalent in Nottingham in July.

The second wave peaked from October to December 1918. Virulence was much higher, more people were dying and, unusually, young adults (age roughly 20-40) were particularly at risk with mortality peaking at around 28 years of age.

The high mortality among young adults was apparently caused by inflammatory “over reaction” (cytokine storm) making the young and fit surprisingly susceptible. A recent suggestion is that exposure to flu in infancy or early childhood (there was a pandemic in 1890) may have sensitised those so exposed to this adverse reaction. This would account for the observed rather sharp maximum in the mortality distribution at around 28 years of age.

By late 1918, influenza was a world-wide pandemic. No country escaped. There was a third wave in many places between March and April of 1919.

Why was it called the Spanish flu?

The term ‘Spanish flu’ seems to have been a consequence of wartime censorship. Belligerent nations did not want their enemies to know how badly they were affected by the flu so reporting was suppressed on both sides. However Spain was neutral and there were no such restrictions. In particular the severe sickness (and eventual recovery) of King Alfonso XIII was widely reported in May 1918. This created the false impression that Spain was particularly hard hit by the disease in this first wave.

The name “Spanish Flu” therefore reflects the place where it was first widely reported and not its true origin.

Influenza hit hard in Nottingham. The second wave of the pandemic peaked between October 19th and December 21st 1918. During the second wave, people died quickly within days of contracting the disease. By the autumn of 1918, the papers were full of death notices. In October, the General Hospital was closed to visitors and two men died of flu at a training camp for discharged soldiers. The death rate soared and there was a medical crisis in the city. There was a great shortage of nurses and doctors; appeals were made to retired nurses to come forward. More returned soldiers died, including some of the many wounded patients in local military hospitals.

Nationally, there were over 5000 flu deaths in the week following the Armistice including 247 deaths in Nottingham. Flu deaths continued to rise throughout November. Factories, businesses and schools closed in Nottingham as work forces were decimated. The Nottingham Evening Post stated: ‘Never, since the Black Death, has such a plague swept over the face of the world.’ Looking at Nottinghamshire as a whole, the north-east was the worst hit area and the south-east, which includes Radcliffe, was the least affected. Nevertheless, the November 1918 minutes for Bingham Rural District Council, which included Radcliffe at that time, stressed that there was an urgent need for grave diggers and coffin makers in view of the current crisis. The mortality figures for Bingham District, which included Radcliffe and many surrounding villages, show that there were twenty-six deaths of children between the ages of 0 and 14 in the period October to December 1918. Fifteen women between 19 and 40 died in the same period. These figures are much higher than those for deaths in the same quarter in 1917, when six children and six women died, and 1919 when five children and four women died.

As the coronavirus (COVID-19) enters a phase where cases are being reported globally, people are struggling with strategies for dealing with the prospect of school and workplace closures similar to those seen in 1918.

Flu comes to Radcliffe on Trent

The influenza death toll in Radcliffe is unknown but there was an exceptionally high number of burials recorded for this period.

Nine military patients and one attendant at Nottingham War Hospital (Saxondale) have been identified who died of flu between mid November and early December. They were patients Frederick Roland Bennett, William Donkin, Joseph Gleave, William Foley, Albert Lydiate, Arthur Orchard, Herbert Maddock,Rhoderick Parkin, Clement Sage.  and Ernest Conroy, attendant. Two flu victims were buried in Radcliffe Cemetery and the bodies of the other men were returned to their home towns and villages.

Radcliffe School was closed between November 18th 1918 and January 2nd 1919. It is currently not known whether any school children died in the epidemic.

Agnes Pike, photograph below, a teacher at Radcliffe School, was widowed when her husband Charles died of wounds near Ypres in 1917. She succumbed to the flu in late December 1918 at the age of twenty-nine. She left two orphaned children, Dorothy Mary and Richard Pike, aged seven and five. 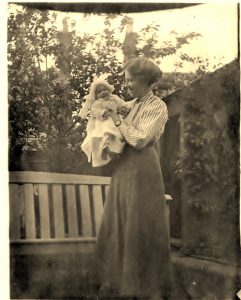 Sarah Jane Chamberlain was a Nottinghamshire schoolteacher, daughter of Henry Chamberlain, a maltster living on Bingham Road. She died of influenza on November 10th, 1918, the day before the Armistice. She was twenty-six.

Ethel Rosetta Smith, a hay baler with the Women’s Forage Corps who lodged on Bingham Road, died of influenza in mid- November. She was twenty-one.

Two Radcliffe servicemen, Horace Beet and Ernest Howard died in France from flu immediately after the Armistice. Serviceman William Brice died from flu in December at Lincoln. Former serviceman Daniel Smith died in Radcliffe in February 1919 during the third  wave of the pandemic.

A number of servicemen were ill abroad with influenza during the pandemic and survived. Despite the shocking death toll, the great majority of those in Britain who contracted flu did recover. In Radcliffe, for instance, school teachers Mary Scrimshaw, who had the illness during the first wave, and Eliza Frear, who was ill during the second wave, returned to school as soon as they could.

The pandemic petered out in 1919. Related but less lethal strains of the virus remained in circulation for many years. Recent estimates suggest in total there were around 174,000 influenza deaths in Great Britain during the 1918–1919 pandemic. When it was over the Registrar General produced a report on the pandemic based on mortality statistics. The county borough of Nottingham was placed sixth out of eighty-two county boroughs in terms of mortality; the report demonstrated that Nottinghamshire was among the worst affected areas in the country.