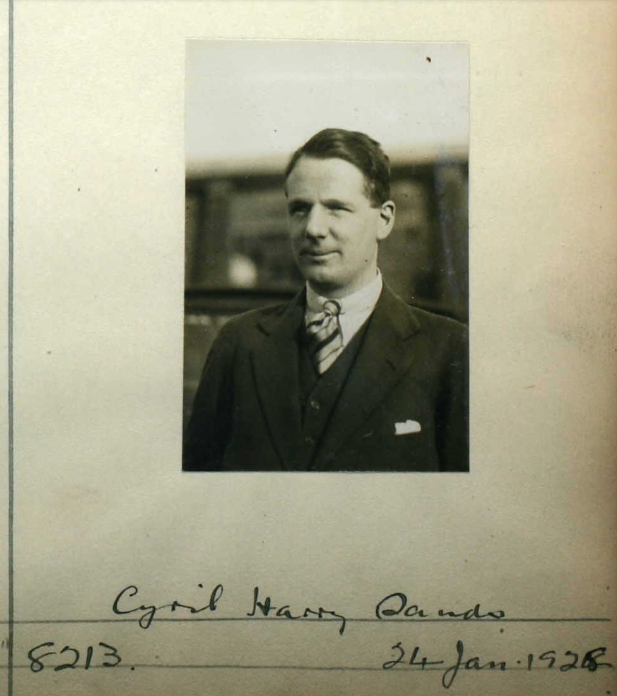 Cyril Harry Sands was born on Noel Street, Nottingham on 29th June 1895, the son of Harry Hall Sands and Mary Alice Sander. He had two sisters Alice May born 1900 and Kathleen Mary born 1911. (Kathleen married Charles Suffolk of Radcliffe on Trent in 1936).

He was educated at High Pavement and was a student at Nottingham University College and a member of the Officers Training Corps from 1911-1914. At the outbreak of WW1 he volunteered, receiving a commission in 13th Sherwood Foresters in September 1914, and was promoted to lieutenant in November 1914. He was one of a special draft of officers sent to the Dardanelles in May 1915 and was attached to Royal Inniskilling Fusiliers. In June 1915 he suffered a knee wound and on 5th July 1916 while serving in France a wound to his right shoulder.

On his return to UK he joined the Royal Flying Corps and was designated a proficient pilot. His skill in handling various types of aircraft won recognition from the Air Ministry and he was put in charge of instructors at a home station for the rest of the war.

In 1920 he received his B.Sc.(Eng) and rejoined his fathers business, Sands and Walker, consulting and civil engineers and on the death of his father he became head of the firm. He married Doris Irene Whiteway in 1922 and they had a daughter Mary E W born 1926.  By 1923 the family had moved to Radcliffe on Trent.

He received a Royal Aero Club Aviators Certificate in January 1928 and trained young pilots in a de Havilland Moth at Tollerton. A keen cricketer, he was Secretary of  Radcliffe on Trent cricket club from 1923 to 1929 and in 1934 he was Captain of Radcliffe Golf Club, his father had been captain in 1932.

Squadron Leader Herbert Baker and Lt Col Cyril Harry Sands died in a road traffic accident on the Clifton/Gotham road while on active service on 15th April 1942 and Cyril Harry Sands was buried in Radcliffe cemetery with full military honours.

A bell at St Mary’s church, Radcliffe on Trent was dedicated on 3rd December 1947 in memory of Henry Hall Sands and Cyril Harry Sands.

TO THE GLORY OF GOD
AND
IN MEMORY OF
HENRY HALL SANDS AND HIS SON CYRIL HARRY SANDS
A.D. 1947