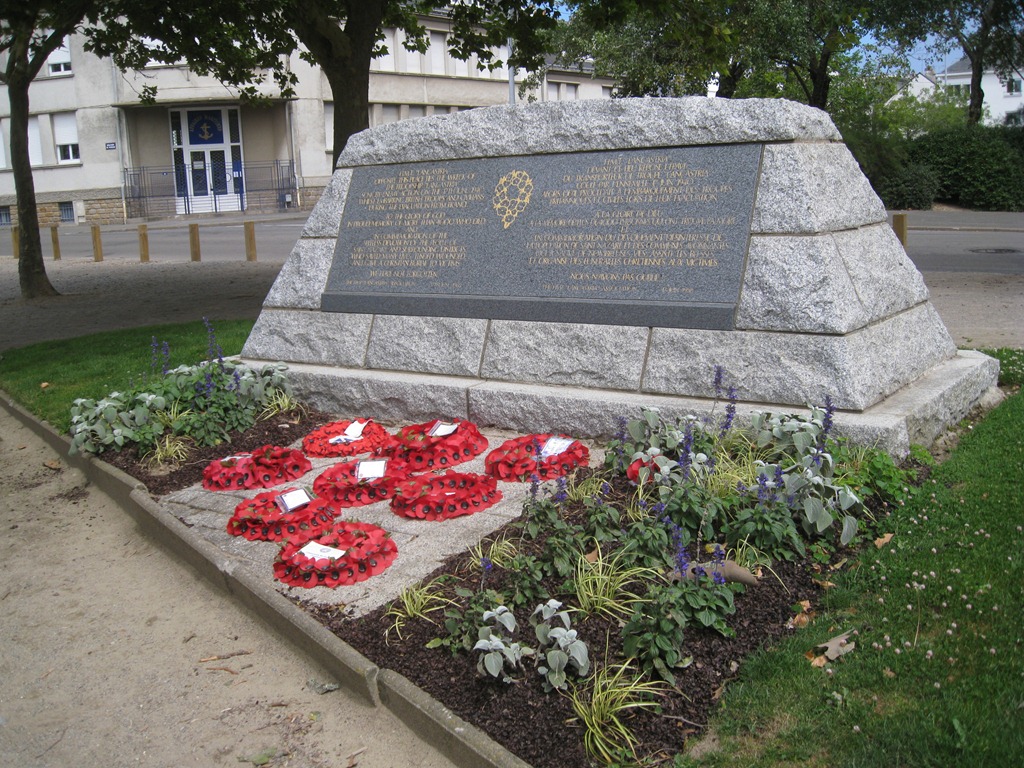 On the sea front in the harbour town of St. Nazaire the official Lancastria monument can be found.  Inscribed in both French and English it reads:

“Opposite this place lies the wreck of the troopship Lancastria sunk by enemy action on 17 June 1940 whilst embarking British troops and civilians during the evacuation of France. To the glory of God, in proud memory of more than 4,000 who died and in commemoration of the people of Saint Nazaire and surrounding districts who saved many lives, tended wounded and gave a Christian burial to victims.

Donald Phillips Durrant was born 16th April 1916 at Whittlesey, Cambridgeshire, the son of Reginald James Adams Durrant, a chemist at Boots and Mabel Fox.  He had a sister Greta, born 1926. Donald was educated at Nottingham Boys High School.(?)

In 1939 his parents and sister lived at Simla, Bingham Road, Radcliffe on Trent while Donald was working as a kitchen porter, living on Cork Street, London.

He volunteered on or soon after the outbreak of war and was a Corporal in the Royal Army Service Corps, Service number 105133.

He drowned at sea on 17th June 1940 when the Lancastria sunk 10 miles off St Nazaire while evacuating troops and refugees.  He is commemorated at St Nazaire and on the Lancastria Archive.  His name was circulated on the missing list which were sent to all Prisoner of War camps.

On Monday the 17th of June, 1940 at 3.48pm the requisitioned Cunard cruise liner, Lancastria came under attack from enemy aircraft.  She received three direct hits from a German Junkers 88 bomber and within 20 minutes, the 16,243-ton luxury liner sank, taking with her an estimated 4,000 victims.  The sinking is the worst single disaster in British maritime history, and claimed more victims than the sinking of the Titanic and Lusitania combined.  It is also the largest single loss of life for British forces in the whole of World War 2.  It is a disaster which has remained largely forgotten by the history books.  The exact death toll may never be fully known and estimates range from as low as 2,500 to over 6,000 lives lost. The Lancastria’s acting Adjutant had desperately attempted to compile a list of those boarding from the small fleet of vessels ferrying men and refugees out to Lancastria and initially put the figure at almost 9,000 embarked, a figure backed up by a number of survivors.  That figure may be exaggerated and its certainly disputed by the British Government.  Recently authors, such as Brian Crabb, have managed to pull together a full list of those known to have perished aboard Lancastria but there is evidence to suggest that many more individuals boarded the Lancastria than official records indicate.

However the scale of the disaster is only one small part of the story and does not reveal the true extent of the horror that day.  The events of that afternoon have become obscured, not least because they also coincided with another ‘larger’ news story, the formal announcement that France had capitulated to Hitler’s Germany and Churchill, on hearing news of the Lancastria disaster, immediately placed a D-notice on it forbidding any knowledge of the sinking reaching an already demoralised public.

Secrecy, whether deliberate or otherwise, continues to shroud the Lancastria.

Courtesy of the Lancastria Archive