Gordon Scott Eccles was born 9th January 1916.  When he was 5 months old the family sailed on the “Mooltan” to the East Indies returning in 1923; his father David was employed by the Salvation Army.  His mother was Janet Orr Ballentyne and he had 2 brothers James Goodwin, born 1914 and Roy Wallace, born 1934 and a sister Dorice, born 1928.

Gordon received his B.Sc at Bristol University in 1938 and a Diploma in education in 1939, becoming a Science Teacher at Kingsmoor School, Glossop, Derbyshire where he was resident in the school.

In 1939 his parents were living in Brightlingsea running a Salvation Army Hostel.  By the time Gordon enlisted at Cardington in 1940 his parents had moved to Radcliffe.

He enlisted as a Pilot Officer RAF 99 Squadron (Bomber Command) Wellington Service no 63486.

On August 7th 1941 Pilot Officer Eccles, on a training flight, had crashed into tree tops shortly after take off having failed to gain height.  Three of his crew were injured.

On the 1st September 1941 at 2.48am Pilot Officer Gordon Scott Eccles was returning from his first operation, a raid on Cologne.  There were five of them aboard the Wellington of 99 Squadron, Bomber Command, but due to poor visibility they were diverted from RAF Waterbeach, where they were stationed, to RAF Mildenhall some 30 miles away.  Alfons Koster, a top Luftwaffe ace had taken off from Gilze Rijen in the Netherlands.  He found an  Anson which he had attacked killing one of the crew but which had landed safely.  An hour later he spotted the 4 Wellingtons.  He shot down one, which was making a second circuit, and it crash landed in a field near Beck Row, in Suffolk killing P/O G.S.Eccles, Sgt Hodge, Sgt F A B Brodribb RCAF, Sgt Mallett and Sgt Boxall. The rear gunner Sgt Stevens survived injured.

Gordon’s grave, below, is at Waterbeach Cemetery, Cambridgeshire. He is also commemorated at Bristol University. 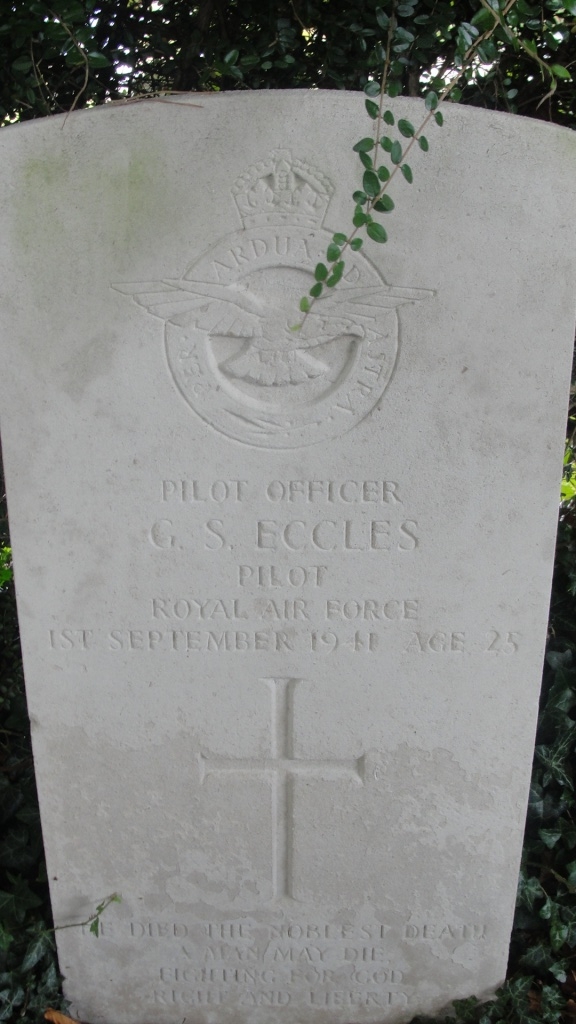