I thought it might be appropriate to reminisce about the war years in the village 1939 t0 1945. There can’t be many left of us that lived through that period and, though I have mentioned in previous editions, I thought a section devoted specifically to that time might be of interest.

I was 6 years old when war broke out in 1939. My family were on a weeks annual holiday in Yarmouth. As soon as war was declared father said we should come home. Changes in the village started straight away.

The first major change was the blackout. Everywhere was in total darkness after nightfall. Special screens were made for our shop window. Blackout curtains were compulsory and ‘blackout wardens’, the ARP, patrolled the village ensuring no light was visible. ‘Put that light out’ was the call, should a chink of light appear. A route of large telegraph poles ran through the village to Grantham at that time. All were painted with white bands 12 inches wide. There were few cars but they had special cowls on the headlights. Street lamps were extinguished. Trains had blue bulbs in the carriages and tarpaulin sheets over the cab of the engine to shield the glow of the firebox. Small hand torches were allowed but used very briefly.

Brick air raid shelters were built in the Bingham Road school playground and anti splinter netting glued to all the classroom windows. Every child was issued with a cardboard box containing a personal gas mask. Air raid practice took place once a week when the gas mask was put on and we sat under the desk (until the shelters were built). Special Mickey Mouse capsules were supplied for babies. Gas bombing was a real threat and worry remembering the First world war against the same enemy!

Evacuees, mainly from Sheffield, Littlehampton and Yarmouth arrived in 1940. Billeting Officers distributed evacuees round the village. There was no warning, they were yours to look after till further notice! The air raid siren was mounted on the police station roof and was tested once per week. An undulating note for imminent raid and a continuous note for all clear.

Ration books were issued fairly soon. Each family had ration books depending on individual circumstances. Almost all foodstuffs were rationed. Two ounces of butter/cheese per week and similar small allocations for other items, including sweets. Men involved with manual labour had a slightly higher allowance. Clothes coupons were needed to buy basic clothing or bedding. Coupons could be saved to buy something big like an overcoat. Girls had great difficulty getting nylon stockings, (till the Americans arrived!) Lovely legs were dyed with coffee and brown crayon lines drawn down the back to represent the seam! I often wondered whether the expression ‘where to draw the line’ came from, perhaps it was stockings!

Soap and soap flakes( detergent hadn’t been invented) were rationed. We only changed our underwear once a week on Sunday and washday was Monday! There were no oranges or bananas but an orange juice supplement in a bottle. ‘Dig For Britain’ was the call. Everyone was encouraged to grow as much of their own food as possible. My Dad had an allotment off Shelford road, now built on of course. Meat supplies were very restricted and on ration. A beef joint was a luxury every month or so. Eggs were at a premium and many families had a few chickens. Powdered egg was available but not like the real thing. Bread was not rationed but was a light brown colour. It was rationed after VE Day! Flour was at a premium. Petrol supplies were rationed and limited to essential use. Anything which was imported was very restricted because of the awful shipping losses.

An Italian prisoner of war camp was situated at Saxondale. The ‘prisoners’ worked locally on the land. I thought they enjoyed their incarceration far more than shooting people in Italy! I fiddled my way in past the guards many a time and enjoyed talking and a thick slice of bread and jam. I thought they were very nice blokes. Editors note: near Saxondale village not Saxondale hospital, see map below 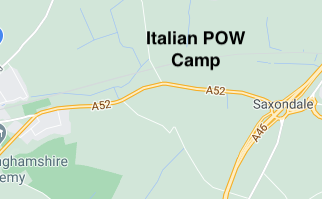 All aluminium pots and pans had to be handed in to make aeroplanes! A number of special days were arranged. I remember some at Mr Arthur Rose’s garage. ’National Savings Day’ and ‘RAF Day’ were two of them. I remember a huge 8 man rubber dinghy used to save bomber crews ditched at sea being displayed in the garage showroom. The smell of rubber stays with me. I often watched Lancaster bombers from Syerston, flying over the village, en-route to Germany in the early evening. They returned fewer the following morning often on fire with holes shot through wings etc. Bomber Command paid an awful price with 55,000 young men perishing. Another incident that sticks in my mind was seeing the glow from the city the night the gasometer was bombed. The Co-op bakery on Meadow Lane was also bombed. They thought by accident from a stray German aircraft looking for the gun factory!

The war drained the village of all its young men of recruitment age. Some, like my brother, were on reserved occupations. He was a fireman on the railway and was very much need to keep the railway going, essential for maintaining the war effort. Another essential job was the production of coal. To this end some young men were conscripted to the mines. They were called Bevan Boys and, in my opinion, together with Land Girls, were unsung heroes of the war.

A training aircraft crashed, just missing the Bingham Road school, into the dyke near the railway killing the pilot and another airman

One thing that sticks in my mind is how we mended things. Holes in socks were darned. My Mum was posh, she had a wooden mushroom to go inside the sock. Lower mortals used an old light bulb! You looked to get 2 or 3 years out of a pair of socks! Anything that was broken was mended. Pot menders for mending holes in pots and pans for instance!

The ‘Forces Sweetheart’, Vera Lynn, was frequently heard singing White Cliffs and Whale Meat Again! Flanagan and Alan were also very popular together with Tommy Handley and ITMA on the radio (unless the battery went flat!)

I trust you enjoyed your sunny VE Day celebration on 8th May. All around us on Shelford Road seemed to be relaxed with an atmosphere of friendship! I put them some music on from my PA system and even made them suffer me singing a song! That is above and beyond the call of duty! And, just to keep you informed, I have reached ‘advanced level’ in hanging washing out!

Keep safe and in good spirit everyone, let’s continue to help each other and get through this trying time together to a happier future.