A Happy New Year to everyone. I trust that we all had as nice a Christmas as possible. It seems the virus is attacking us more and more, particularly in the south and we are bracing ourselves for whatever 2021 is going to throw at us! Everilde and I sat looking at each other over the dinner table on Christmas day, pulled a cracker (that’s what she said I did sixty five years ago!) no comment!

Daughter Kathryn delivered our Christmas lunch which was lovely. Her Mum taught her to cook many years ago. She has improved her menu over the years though and now fries beetroot and brussel sprouts and all that sort of thing, foreign and quite unnatural, I reckon.

Well did you all have a nice, if unusual Christmas? I find it a period of very mixed feelings. Joy, happiness and excitement for the children with all the lights and tinsel but a bit of sadness for the ones we knew, not here any more. Anyway it’s gone now and we can get back to normal… whatever that is! Because, as I am sure you know, I am a delicate and vulnerable octogenarian, I have my anti Covid vaccine injection at the QMC on 2nd January. Just a sharp scratch…I’ve heard it all before! I have yet to be given the date for the follow up booster. Reminds me of my army days and the ‘TAB’ jab at Catterick Camp (which also needed a booster) but that’s a long story! My yellow fever jab in the stomach was given with a needle like a biro pen, I wish I’d kept my eyes shut!

I thought you might enjoy an amusing Radcliffe ‘doggy’story’ for the New Year.

I’m sure all of you will know of the Radcliffe Golf Club. In my young days it was an extremely prestigious gathering of members who could not only afford the membership fees but the time off work to play! I’m sure it still is today…but not quite as much! The 18 hole course is pristine and a credit to the greenkeepers who have maintained it over the years. When I look at my fiddling little grass patch lawn condition I wonder why I bother!

To earn an extra shilling or two some of us youngsters were allowed to caddy for players. For those of you not familiar with the name ‘caddy’ in the professional game it is a person that carries the players bag of clubs, advises the player which direction to hit the ball, which club to use, how hard the wind is blowing etc. and looks for the ball when played into the rough! More or less everything short of playing the ball!

In the amateur game it is just two of those duties. Carry the bag full of clubs round eighteen holes and look for lost balls in the rough!

For my part, after delivering some fifty odd Sunday papers round Golf Road, Johns Road, and the ‘Frying Pan‘ (where’s that?) starting at 6.30 am for Harry Packwood (he who had the paper shop on Packwood’s Hill) I would bike up to the golf club and, with a bit of luck, get a caddying job for a few bob. 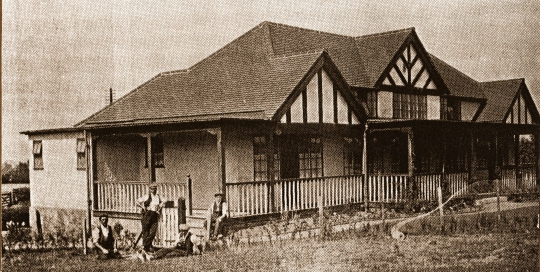 The fine clubhouse was nearer the bottom of Cropwell Road before re-locating to its current situation on Dewberry Lane. This took till lunchtime on Sunday to carry for the 18 holes. It was after my voice broke so church attendance was not affected. As an added bonus we were allowed on the course to search for lost and abandoned golf balls to sell back to members at a much reduced price. I am sure it still happens today. Quite lucrative. In those days golf balls were not so easy to come by and were far more expensive.

One of my pals (no names this time) came by a little Jack Russell terrier. A lovely sharp little animal that he named ‘Dunlop’! I was baffled by the name too, all will become clear.

On visiting him on the Harlequin field (now a sports ground with football pitches) near where he lived, I found him training the pup. A golf ball was placed on the ground some 30 yards from the dog held securely by my pal. On the command ‘fetch’ the dog shot away and picked up the ball and returned it to his owner. Quite a normal activity for a dog you would say.

The reality was far more sinister! 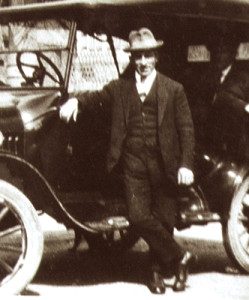 Crow Hill is the rising slope from the A52 up to a large hedge beyond which is the golf course. Difficult to see now because of the large wild hedge bordering the A52 road. It was the site for targets used for target practise shooting from ‘The Butts’ on Bingham Road during and before the 1914-18 war. Tommy Pepper, see photograph (who owned the garage where the Ashmore’s Restaurant, bottom of New Road now stands) he was our local councillor and lived in a house on Bingham Road called ‘The Butts.’ It is still there now. ‘Vote,vote, vote for Tommy Pepper for he’s the best man in the land’… I can hear the song now!

Crow Hill was ideal for sledging. In my young days we used to get real winters with plenty of snow and weeks of hard frosts. Skating on the frozen Lily Ponds was very popular. We often threw a couple of buckets of water down in the school playground to make a great slide when frozen. We just don’t get the hard winters these days we used to.

With a good sledge with highly polished runners you could fly down Crow Hill, through a hole in the hedge at the bottom and throw yourself off before hitting the fence bordering the A52! Usually done to show off and impress the girls up there!

Now the sinister bit! My friend (now passed away) took me to the top of Crow Hill with Dunlop. On the other side of the hedge at the top was, I think the 15th or 16th green. It was a par three which meant (if you were any good) you should land you ball on the putting surface playing from the ‘T‘ to leave you two puts to the hole. Sadly, most members were not that good thus, the ball often landed in the semi rough. Dunlop would be released, and, with the command ‘fetch’. He would shoot out from the hedge and recover (steal) the ball and return it to my friend! Dunlop was a trade name often printed on golf balls. Now you know the reason for the dog’s name! Later, after scrubbing in the sink to remove any identification, it was sold back in the clubhouse as a lost ball!

I was mortified! I went hot and cold at the thought of this activity. I straightway warned him there and then to stop it or I would have to report it to the club. Thankfully he saw sense and stopped the deceit. There was sufficient influence in the golf club membership to put both of us away for ever, even if I survived my Dad which was in serious doubt.

Thankfully the issue never came to light until today. In some ways I like to compare my pals initiative with some of the activities that won us the war. My Dad would not have accepted that in a thousand years! It is because everyone that might have reacted to that story has gone to that great golf club in the sky I feel comfortable telling you ! On reflection I am sure it was done more as a prank than with malice and deceit. I have often been to the current clubhouse for a meal. Looked out on to the 18th green and thought of Dunlop!

Take care and stay safe everyone till we can all safely get together and breathe Gods clean and free fresh air again.