On then with a light story or two to hopefully make you smile and learn a bit more about the village back in the day!

The River Trent and its various and many influences has always been a major factor in the village. I remember when, almost every winter, the whole area round the Wharf ferry and the home site used to flood, including the recreation ground (Rec). The building of the sluice gates at Colwick to control the water flow changed that thank goodness. 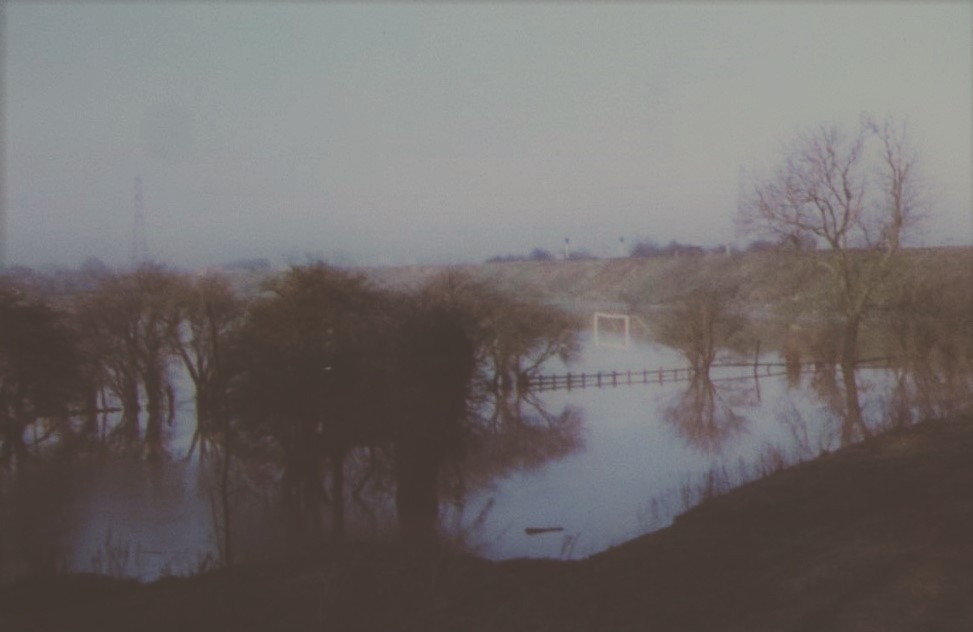 Radcliffe Olympic football team got going again after the war. Very few team sports were played during hostilities because all the men were ‘otherwise occupied’ I remember some of the Olympic team players at that time. Bob Daniels, (he with a lovely singing voice) woolly jumper and flat hat in goal, ‘Ding’ Bell, full back. The Cook brothers Roy and Norman, forwards. Bert Pritchet, right wing and trialist for Arsenal no less! It was a game for hard men in those days. Non of this throwing yourself down and writhing about in agony from a gentle tackle. The keen ‘trainer’ with his kit, a bucket of iced water and a sponge, the thought of that delicate application in the right place got you off the ground sharpish I can tell you!

Boots were strong leather with four ‘noggins’ secured to the sole and two at the heel with three nails to secure them and laced up with strong laces. Shorts were below the knee, far more respectable than fancy little knickers these days!

The ball was a size five, T section, leather beauty with a rubber bladder passed through a hole in the cover. It was then inflated with a bike pump and a laced up. Both ball and boots were treated to a sticky dressing of ‘dubbin’. This, theoretically, kept the leather supple and, importantly, waterproof! Don’t make me laugh. Ten minutes play on the sodden, recently flooded Rec. pitch, and the soaked leather ball weighed a ton! Try heading that like they do these days with a light plasticised beach ball, especially if your forehead happened to connect with the laces, ouch! Concussion alley I can tell you! The lines were marked with creosote (banned now of course). The linesman, with a handkerchief, was anyone available prepared to put up with the abuse from players and onlookers on off-side or any other decisions!

Because of severe restrictions (and careful finance control) the club only owned two balls! That made for problems if one went flat during the game and the reserve was a bit soft. The bike pump, with inflator adapter, was kept against the goal post! There were no nets at the goal either. That caused the occasional debate on whether the ball went in or outside the post I can tell you! Rural, spirited, high energy football at its best. The changing room was The Manvers. Half time refreshments were quarter of an orange!

There have been so many changes to the village since those early days it is a little difficult to remember what is was like at that time. So much building development. The Grange, our wonderful local facility was a field. No Canadian Estate or Water Lane house development. No shops on Shelford road other than Rileys and Rowes paper shop at the bottom. The old Co-op where you were served by an aproned assistant from shelves behind the solid wooden counter. Sugar sold in a blue 1Ib sugar bag neatly folded at the top (I’ve filled hundreds in our shop). Butter (or lard) cut from a slab on to folded greaseproof paper (2 ounces remember!) Biscuits served loose from a square tin. Bacon, in as many rashers your ration book allowed, sliced on the bacon slicer in front of you. Each slice deftly caught by hand and laid precisely on a sheet of greaseproof paper as it emerged from the rotating sharp slicing wheel. Spam served similarly through the slicer!

No National Westminster Bank, I remember it being built on my Uncle Toms garden! No shops opposite either other than Mr Easts fresh fish shed. Mr Huskinson, the butcher, next to the Royal Oak. Mr Roe’s garage where the chemist and the take-away is now. 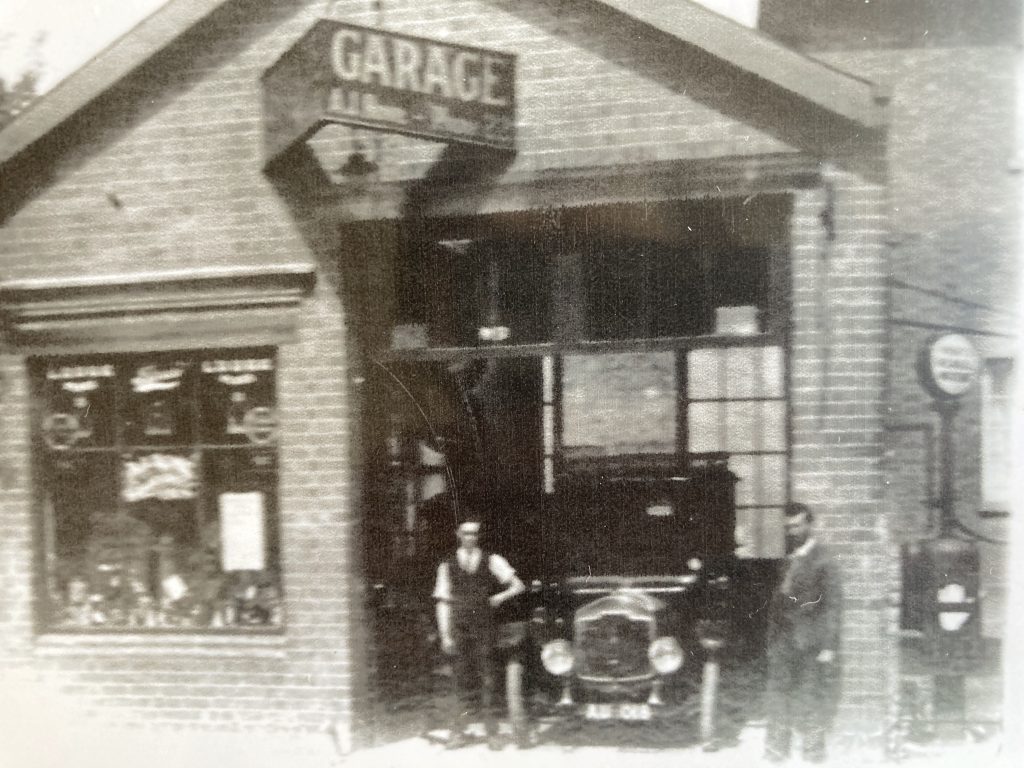 A J Rowe’s garage Photograph from the Cutler Collection

I see bespoke gents tailor Mr Arthur Rose’s name has cropped up from his sign on the end wall of his house on Packwoods Hill. He was a very nice chap and made some beautiful ‘made to measure’ suits and jackets. Burtons, C & A Modes and similar gents multiple outfitters put him out of business eventually I think. 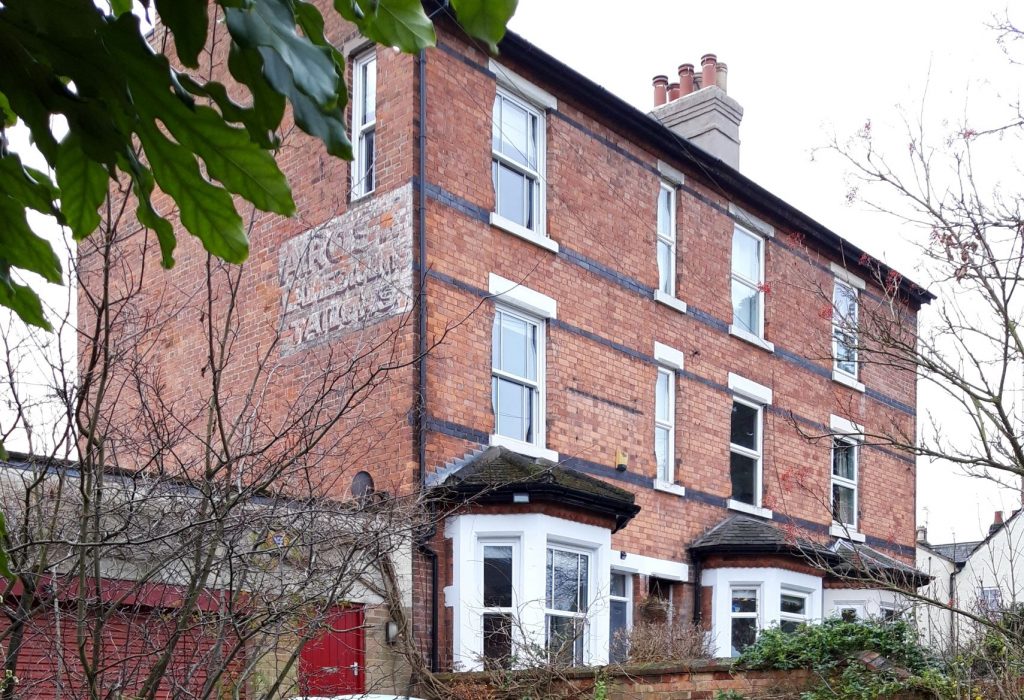 Walker’s yard led to Walkers Nursery. Nothing to do with children you youngsters, but growers of plants, vegetables and lovely flowers in large greenhouses.

There were quite a few nurseries in the village at that time but no local Garden Centres. In the thirties Welbourne’s on Bailey Lane, and later Hills at the top of Marl Road. His son Mick was a good pal of mine and I remember one of the greenhouses full of hundreds of cucumbers ready for cutting.

One of the specialities grown here in the village was chrysanthemums. Walkers specialised in them but my experience of growing them was with Mr Jack Dent. He had the piece of ground at the A52/Cropwell Road crossroads where he grew hundreds of different colours and varieties. He often sent to a company at Alfreton for specialised, very expensive, new variety, cuttings and brought them on in his greenhouse at home. It takes nine months to produce the flowers. Starting the cuttings, potting on, planting out staking and tying in, spraying for pests selecting four spurs, each with a flower. Disbudding, paper bagging each budded stem to keep them clean and not rain damaged. But it was all worth it when beautiful incurved and reflex blooms, 6inches across, appeared. He would then cut a huge bunch and take them down to the Black Lion pub on a Sunday lunchtime to sell all them in minutes. I spent hours sitting with him outside his shed at the allotment and am grateful for all he taught me about growing chrysanthemums. I loved being in the company of such talented, dedicated experienced people, I learnt so much. I’ll tell you about George Wheatly, wheelwright of Water Lane, in a future edition.

Well that’s about all for this ramble people. I hope you found it a little interesting and a worthwhile read. We are all living in very sad times and the longer it goes the worse it seems to get. They hope to have young and old injected by June so keep out of trouble till then.