I am sure many of you will not know how the railway and the huge marshalling yard at nearby Colwick played a part in the lives of many Radcliffe people, especially during the war. Many of my family were railway men in the good old steam days. My dad was a guard and my brother a driver. He drove Her Majesty’s train into Midland Station when she was visiting Nottingham one time. He was, to say the least, worried. He had to stop the steam engine bang on a white line painted on the platform, without a jolt. Not easy with a sixty ton steam engine. The Queen then stepped out on to the red carpet on the platform!

Racing pigeons and the railway were also associated. How on earth I hear you say! Radcliffe had very many pigeon fanciers before, during and after the war. Bill Heatley, who lived next door to me. Jack Lambert, whose farm and barn was converted into the Chestnuts Country Club, (now Tudor Grange Care Home). Cousin John Flower on Golf Road and Alf Widdowson to name but a few.

Friday night was the timing night at Radcliffe station. The birds were taken to be registered and a little numbered rubber ring put on their leg. They were all put in a basket and eventually put on a train and taken to the release place.

They went to places all over the British Isles particularly Scotland. They were all released at the same time. When they arrived at their home loft, the rubber ring was put into a timing clock and the exact flight time recorded. Many a time I have stood waiting next door to see an exhausted bird come swooping into Bills’ loft next door after flying hundreds of miles. I learned later that one trick was to send the cock bird to race whilst the hen was sitting on eggs in the nest box. It seems they fly faster when the true love is at home expecting the kids! How they found there way back home was amazing.

Another vital role pigeons played in the war was flying in Lancaster bombers on raids to Germany. So many of our brave lads had to ditch in the sea. Each aircraft carried an eight man rubber dinghy. The exact longitude and latitude was recorded and affixed in a little cylinder to the pigeons leg ready for release. On arrival at the home loft the information was removed and the Air Ministry informed. This made search and rescue far easier. One of John Flowers birds saved the crew of a Lancaster and won the Pigeon Victoria Cross, high honour indeed! (see notes below) 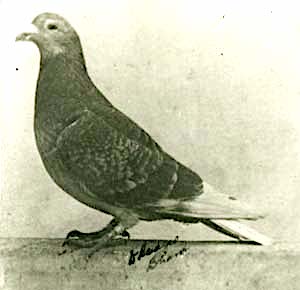 Many times I saw the waves of bombers, fairly low, from Syston going to Germany in the evening and coming back in the early morning often on fire with holes shot in the wings. We could count them out and there were never as many came back. My cousin Reg Flower was in one of them and we prayed for them and him, every night!

Now just a little story to finish with. Up to now all my stories have been the truth, the whole truth and nothing but the truth! This is not my story but from a great friend of mine and he swears it was true! As you may have gathered I loved dancing as a young chap. Mostly modern ballroom but also old time. Wednesday night at the Victoria Ballroom was old time night and me and my mate used to go along. Young men were in high demand at such dances so no problem getting a partner! It was a black tie and tuxedo night with the ladies, in lovely long dresses. One Wednesday I couldn’t go for some reason and my mate went alone. It seems that he asked an attractive middle aged lady to dance and it was the old time waltz. It’s a lovely dance but called the ‘dizzy dance’ for obvious reasons. They had completed one lap of the floor, round and round when she asked his name, “It’s Peter” he said. “Well Peter, I wonder if you could do something for me”, she said. “Of course” says Pete. “Do you know how to reverse”, she says. “No problem at all, but why”, says Pete. “Well, you see I have a wooden leg and I am on the last thread” she said! Now I am not asking you to believe that but Pete was an honest truthful lad. The question has stayed with me all my life. I just wish I had been there that night!

Thank you to all those people in the village who have offered so much help to us. This shocking situation really has brought out the need we have one for the other.

Keep happy everyone and for goodness sake stay safe. This virus does not take prisoners and we must all be ultra-careful.

John W Flower’s pigeon was the recipient of  one of the 32 PDSA Dicken medals awarded during WWII.

DM17: Dutch Coast
Pigeon NURP.41. A.2164
Bred by J Flower, Radcliffe-on-Trent
Date of Award: March 1945
“For delivering an SOS from a ditched aircrew close to the enemy coast, covering 288 miles distance in 7½ hours, under unfavourable conditions, while serving with the RAF in April 1942.”