On then to the stories of yesteryear. I saw on the television last night the long lost film footage of the VE day celebrations on May 8th 1945. I remember that day so well. I was 12 years old and a paper lad for Harry Packwood. The village went bonkers. I was riding round on my bike delivering the Evening Post shouting the news. Even at that young age I understood what it meant to end the bombing and slaughter of so many people of all countries. 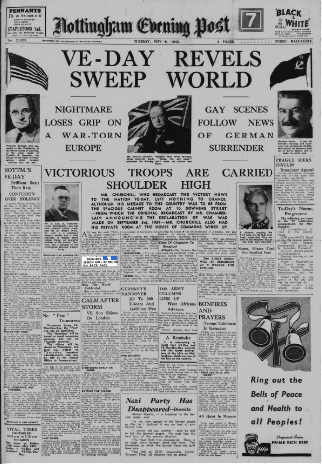 Unfortunately any activities of mine in the village were reported back to my mother in the shop. Dad asked me the day after the war ending euphoria day whether I thought it a waste of time Raleigh putting handlebars on bikes if people were not going to use them!

I saw a comment from someone in these pages about ‘some old person’ had told her about Sandy Bay and Island Dyke down at the river. No, it wasn’t me but I will tell you all about both.

During the war there were very few places to swim. We had Sandy Bay, the Grantham Canal lock gates and kind Mr Clay’s pool at his house on Cropwell Road. There was also Portland Baths in the Meadows but that was 4d return to Trent Bridge on the Trent Bus and 6d to swim.

The Brylcream hair oil machine was a penny but if you put your penny in, held the delivery button in and sucked on the delivery spout you could get a mouthful/handful for about five lads! Lovely for plastering your hair down and making you attractive to the girls! 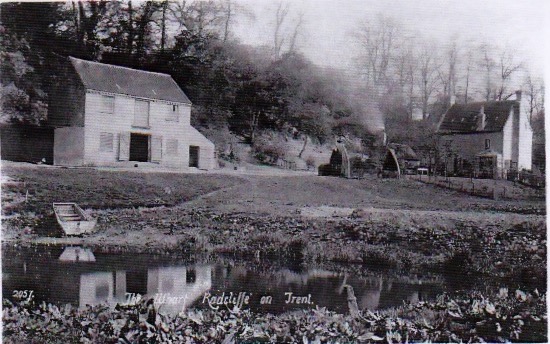 The Wharf at Radcliffe

Back to Sandy Bay. Sam Rose lived with his family in the house at the ferry. He used to row people over the river for a fee. His son Peter was a pal of mine at school. About a couple of hundred yards upstream from the ferry was Sandy Bay. It was a little sandy inlet about fifty yards long. Swimming there was free! We often swam there on hot summer days, but it was dangerous. Not too far out from the bank there was a very deep drop where the dredgers had deepened the river for the barges to pass. The undertows were treacherous. No problem for swimmers but incredibly dangerous for paddlers. Once, whilst on the grass bank, I saw a little girl in her swim suit wandering out toward the shelf, in a second she had gone. I hit the water at almost the same time and managed to grab her before the current took her downstream. I returned her to her Mum and Dad who were more interested in each other than their little girl! I often wonder where she is now and how near she came to drowning!

Another highly dangerous activity was swimming out to passing barges going upstream. The bargemen would throw out a long rope with a bucket on the end. We would grab the bucket and sit on it to be pulled, water skiing style, way up river well beyond the viaduct railway bridge. Now, when I think of the huge propellers on those barges and how close we got to them my blood runs cold!

Another day we were swimming and a gentleman came along the bank. He held some of our clothes up with his walking stick and said if we didn’t come out of the river he would throw our clothes in. Though young I had to give him some advice. I said that if one single item of our clothes went in the river it would very shortly be followed by him. It seemed to have the right effect, he put the clothes down and went on his way!

The Island Dyke ran along parallel to the river about 100 yards in to the field. It was only a little stream and we fished with a net for sticklebacks. The stream had about 18 inches of black mud and a foot of water! On the banks were some huge willow trees. Fixed to one of the top branches, some thirty feet high, was a chain and half way down the chain a rope was tied, not too securely as it happened, with a two foot branch tied to the bottom. On an adjacent tree, high up, was a large branch which was the ‘launching platform’. The rider would climb up the adjacent tree, pull the suspended rope up with a washing line type rope, and sit on the branch with the rope twixt the legs, and launch. It was a really a great thrill flying through the air until the pendulum came to rest.

It was Sunday afternoon. Pete and I were supposed to be at Sunday school, but down at the river! He climbs up to the launching platform, pulls up the flying rope, puts the branch twixt his legs and launches. Right at the top of the first swing the rope, came off the chain! It was pure circus, flying through the air with the severed rope trailing behind him. Best of all he landed, with a huge splosh, in the Island Dyke! Black mud splattered up the bank. When I found he wasn’t dead I wet myself laughing. We pulled him out of the dyke, a black blob, with the rope still attached. We dangled him in the river to clean most of the sludge from him. He begged me to come home with him to share the torrent knew he was going to get from his Mum Sal. There was not much I wouldn’t have done for Peter but that was beyond friendship! We still talk about it to this day!

Keep well and safe everyone. Thank you for your nice remarks about my garden and the offers to come and do yours! You might think there’s no fool like an old fool…but not this old fool!