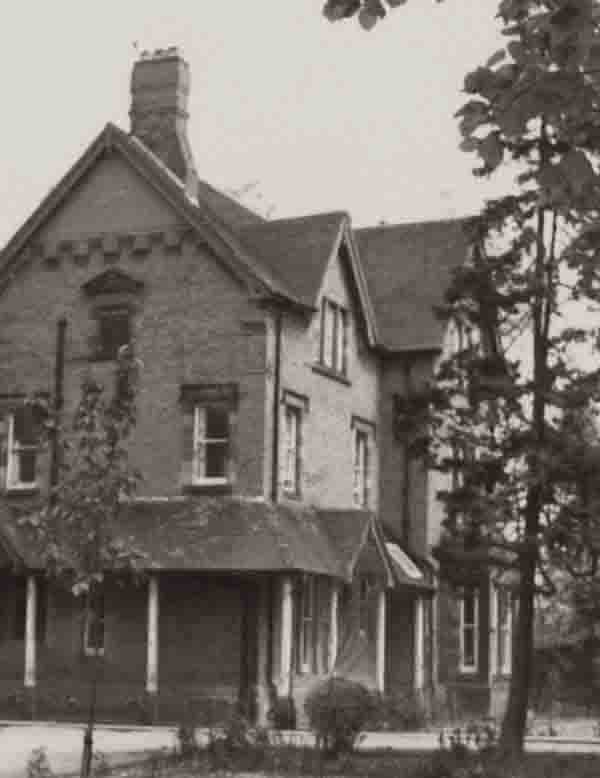 The house was built around 1880, probably by William Henry Burgass whose father was the managing director of the Nottingham Brick Company based at Carlton.  William Henry was born in 1846 in Sneinton, he married Catherine Elizabeth Sharpe in 1869 and in the 1871 census he is recorded as a coal merchant. With Catherine and their two sons, William George and Archibald H they were living on Irongate Wharfe, London Road. However by 1877 they had moved to Sneinton; then by the time of the 1881 census they had moved to Grandholme Villa on Chestnut Grove in Radcliffe and 5 more children had been born: 3 daughters and 2 further sons. In a directory of 1885 they are at Oakfield House on Bingham Road and William Henry is now a timber merchant.  There were decorative ‘B’ symbols on the property, possible reminders of Mr Burgass’s day

Sale of well built freehold family residence and grounds – to be sold by auction by Messrs Morris and Place at The Mart, Bridlesmith Gate,

All that exceedingly well-built family residence known as ‘Oakfield House’ with the gardens, tennis lawn, stabling and other outbuildings – whole 7,112 sq yards now in the occupation of Mr W H Burgass.

On second floor are a billiard or schoolroom, 2 large bedrooms, 2 storeroom and a tank room. In the basement are coal, beer and wine cellars.

At a convenient distance from the house are 3 stall stable, carriage house, washhouse and gardener’s cottage.

The lawn and tennis ground are well kept, the kitchen garden is in a high state of cultivation and the house and buildings are thoroughly well built and being near station, offer exceptional advantages for residential purposes.

A further sale was held on 22 October 1891 indicating that Mr Burgass was wishing to be rid of livestock and implements of an agricultural nature.

After the house was sold the Burgass’s  moved in 1892 back to Chestnut Grove. William and Catherine were next found at Thorneywood House in Sneinton where he died on 28 November 1908, Catherine having predeceased him in 1902.

Rating lists suggest that Oakfield House was bought by a Thomas Emmanuel Middleton (who died in 1900), and a record of 1895 shows his son Samuel renting a room from his father  and then in the 1901 census Samuel and his wife Julia and daughter Kate and grandson Arthur J Gear are recorded as residing here.  Samuel was  a retired lace warehouseman. Their other daughter Annie married Vesty Neale, a photographer  in September 1895 and the marriage notice gives her address as Bingham Road, Radcliffe on Trent.  Vesty died very soon after the marriage and Annie married again, this time to William Hill from Saxondale (who was a brick maker) on 27 June 1899.  I can only assume that William Hill was looking after the sale of Oakfield for his father in law (see  below) when it was again advertised for sale in 1905.

To be sold, that substantially built and delightfully situated residence known as ‘Oakfield on Bingham Road, Radcliffe on Trent, with conservatory, coach house, stabling and large garden, well stocked.  The owner leaving the locality.  For particulars and to view early apply Mr William Hill on the premises.

Walter Wilson, a village resident was employed by the Middletons as a gardener.

The ownership of the house now gets rather hazy but I have been able to indicate the next few residents – Mrs A Julia Cox in 1908-1910. According to a local resident, a Dr Doknell (from the USA) lived here and he recalls that there were some troublesome goats past which the Harlequin children had to be escorted to school.  Rev Henry Gratton (Baptist) is recorded there in 1922.  In 1924 Gerald Drinkwater Johnson and his wife Doris had taken up residence; he had served in the First World War in the Royal Navy and became an electrical and mechanical engineer in civilian life.  They sold the property to the Salvation Army. 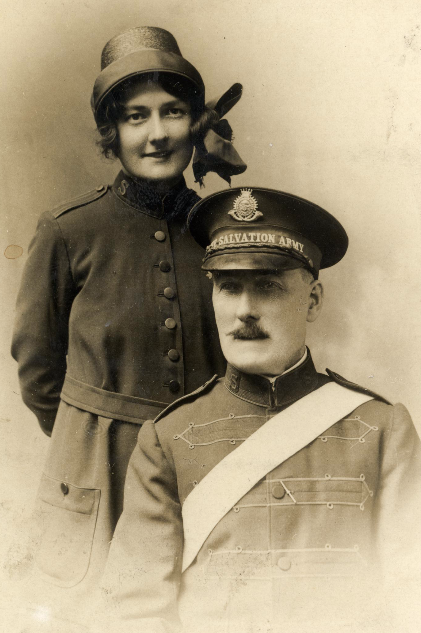 Typical uniform of the 1930s taken by an unknown photographer

This photograph is not of Joseph and Margaret Beattie

House adapted by the Salvation Army at Radcliffe –

The large house known as Oakfield on Bingham Road was purchased by the Salvation Army from Mr Johnson shortly before the second world war and established as an Eventide Home for old couples at a cost of £6000.  The property, which is known as ‘Oakfield House’ is on the Bingham Road and includes large lawns and kitchen gardens and other facilities for rest and quiet.  At the same time it is within easy access of the bus routes.  There is a lounge, dining room and various conveniences on the ground floor, and twelve bedrooms are furnished for two persons.  A new central heating system has been installed and the house has been comfortably refurnished.  The house will be available for couples of any creed and the basis of payment will be according to income.  The first consideration will be given to applicants from Nottingham and the county.

The cost of these installations and general renovation amounts to nearly £6000 and  contributions already received or promised total over £5000.  A total of £7150 is required so that there will be sufficient to meet any shortage of income in the first year or two.

The home will be opened by Commissioner George J Jolliffe (governor of the Salvation Army’s social work for men) on October 13, when the Marquis of Titchfield is announced to preside. 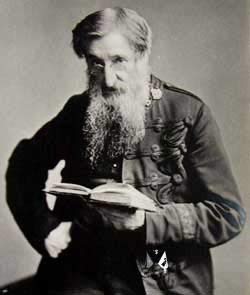 The Salvation Army’s 24th home for aged people and their first in Nottinghamshire was opened at Oakfield, Bingham Road, Radcliffe on Trent yesterday. It is for married couples and is the second of its kind opened by the Army.

The Marquis of Titchfield MP presided and the opening ceremony was performed by Miss Dorothy Griffin, whose late mother’s gift started the effort.  Commissioner George J Jolliffe, who is governor of the army’s social work among men, presented Miss Griffin with the key to open the door.  Before opening the premises Miss Griffin said her mother knew of the good work done in the Salvation Army’s eventide homes and she gave them a sum of money to inaugurate a similar home for aged Nottingham people.  Her mother’s father was superintendent of the Sunday school at Broad Street Wesley Church when William Booth attended it.

The Marquis of Titchfield said he could not think of a better social service than the eventide homes.  He paid tribute to the generosity of the late Mrs Griffin.  The home was one which not only the Salvation Army but the people of Radcliffe on Trent could be proud of.

Commissioner Jolliffe said the Salvation Army had 163 homes and agencies for social work, not all in this country.  The army was steadily growing in other lands, and its name never stood higher than at the present moment. There were seventeen homes for elderly women, five for men, and that was the second for married couples, the other being at Tunbridge Wells.

Brigadier F J Handley said the need of the home was brought to the notice of the late Mrs Griffin and her gift of £2,500 came along.  The Rev C H Hedgman, of Nottingham was another generous donor, the home at Tunbridge Wells being given by the Rev and Mrs Hedgman.  Other friends had also helped.  They required £7000.  They had received £5439 and still needed £1560.

The Marquis of Titchfield and Miss Griffin were thanked on the motion of the High  Sheriff of Nottingham (Mr F E Burton), seconded by Lt. Commissioner A H Barnett.

Clergy who took part in the proceedings were the Archdeacon of Nottingham (the Ven H V  Turner) the Rev C S Belcher (vicar of Radcliffe) and the Rev Ronald K Ross.

Among the company present were Alderman J Baldwin (Lord Mayor-elect of Nottingham) and Mrs Baldwin, and Mrs F E Burton.

There is accommodation for twelve married couples at the home.  Payment will be according to income.  Major R Calvert is at present in charge of the home.

In 1939 Joseph and Margaret Beattie were the Salvation Army officers in charge with approx 10 residents and two staff, Sam Flower the gardener and Winifred Ayres the cook. 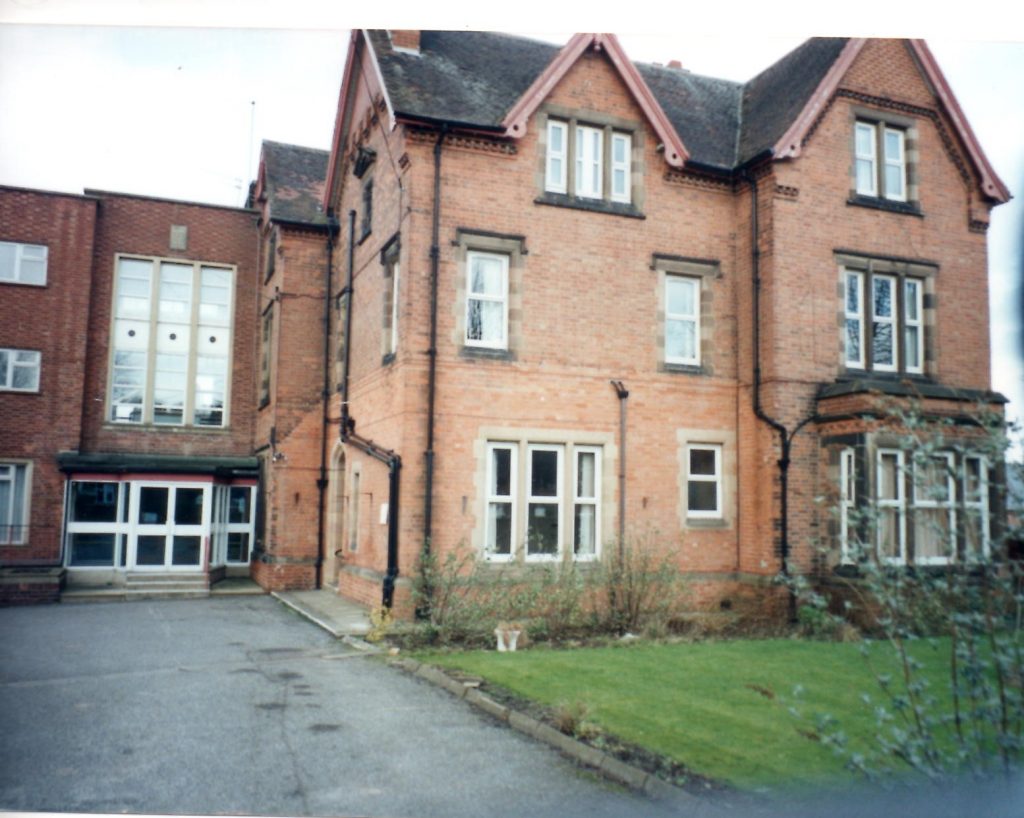 An extension to the home was erected in 1953, (photograph above) providing accommodation for a total of 34 residents, including 4 married couples.  It is a rest home and not a nursing home and residents are encouraged to take an active interest in the home and maintain contact with friends and family, who are welcome as visitors.  Brigadier Mrs Doreen York aims to run a happy Christian household, giving joy and comfort to the residents as individuals and as a family. ( A Village Guide 1997)

Janet Bingham who worked here for over twenty-four years remembers fondly her time working with the residents.  They would help in the gardens and laying tables in the dining room. There was a large greenhouse, vegetable plots and a fish pond.  The Salvation Army band would attend the annual fairs, marching from the village up Bingham Road to the house.  A voluntary group called ‘Friends of Oakfield’ was formed to raise funds.

The house was demolished in 2002 and a small development of apartments and houses were built, but the name Oakfield has remained.