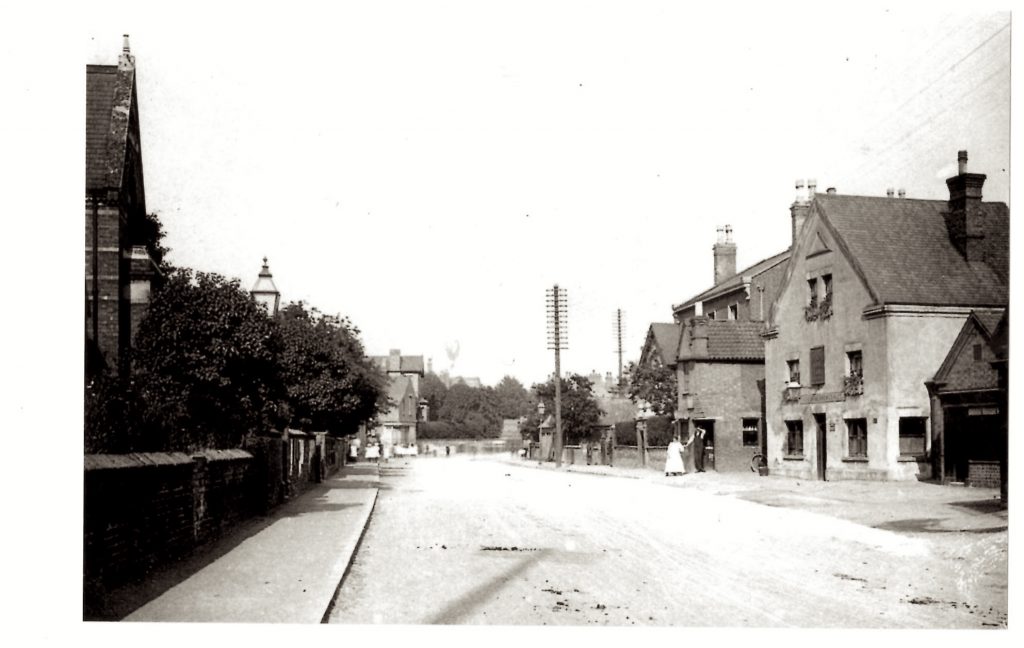 A public house has been on this site on Main Road since the 18th century.  It has had a number of names including The Newcastle Arms, The Duke’s Arms and The Plough; it became The Royal Oak in 1832. The earliest record is in 1780 when Elizabeth Marshall, a Radcliffe spinster, sold the original premises to Ann Richardson, a widow, for £46. It appears that the site was repeatedly bought, mortgaged and sub-let by speculators both from the village and Nottingham.  There were originally two rooms on each floor. Close by were two breweries, tenements and small shops. Attached to the pub was a brewhouse, a corner shop, a butcher’s and a slaughterhouse.

The following landlords have been recorded:

1886 – 1891 No record but assume that the Fryer family would have assisted until the eldest son John was old enough to take over.

Thomas Haynes was born in Radcliffe in 1802 to William and Sarah Haynes. He married Rebecca Morley on 14 April 1824 in Radcliffe and they had 3 children. He was a joiner by trade as was his father William. He took over the pub in 1832 and renamed it The Royal Oak. He died in 1843 at the age of 41.  He had mortgaged the premises and in 1848 the properties were conveyed to his brother, Samuel, who took over as landlord in 1849.  Rebecca, Thomas’s wife, remained at the pub until 1849 when she moved to Nottingham to live with her sister and then, later, her daughter.  Rebecca died in 1871.  Samuel Haynes, brother to Thomas, was also born in the village in 1811. He married Elizabeth Brewster (daughter of John Brewster, a farmer in the village) on 28 April 1846 at St Mary’s church. They had 3 children.  Sam combined his work as landlord with that of a joiner.  He died in September 1855 and Elizabeth died in 1870.  After Sam’s death the pub was put up for auction on 7 August 1856 and was described thus:

All that old-established and excellent PUBLIC HOUSE, known by the sign of  the ‘Royal Oak’ with the large club room, stables and appurtenances thereto belonging, situate in the centre of the village of Radcliffe on Trent and adjoining to the Nottingham – Grantham Turnpike road, now in the occupation of Mr Hilton.

Also at the same auction a number of messuages, dwelling houses and a shop were included, they were all part of  Samuel Haynes estate. The pub was bought by Robert Smith, a farmer of Holme Pierrepont.

The Fryer family took over the pub in 1869 with Paul as the landlord.  He was born in the village in 1867, his father Thomas being the local blacksmith. The forge was located on the corner of Mount Pleasant and Main Road.  Whilst running the pub he also carried on with the blacksmith business. He married Sarah Hallam (a local girl) in October 1865 and they had 4 children, John, Anne Elizabeth, Rosa and Henry.  Paul died in Sheffield on 21 August 1874 at the age of 37.  He is buried in the village cemetery.  Sarah was left to run the pub with four young children, which she did, along with the family blacksmith forge until 1886 when she died aged 48. 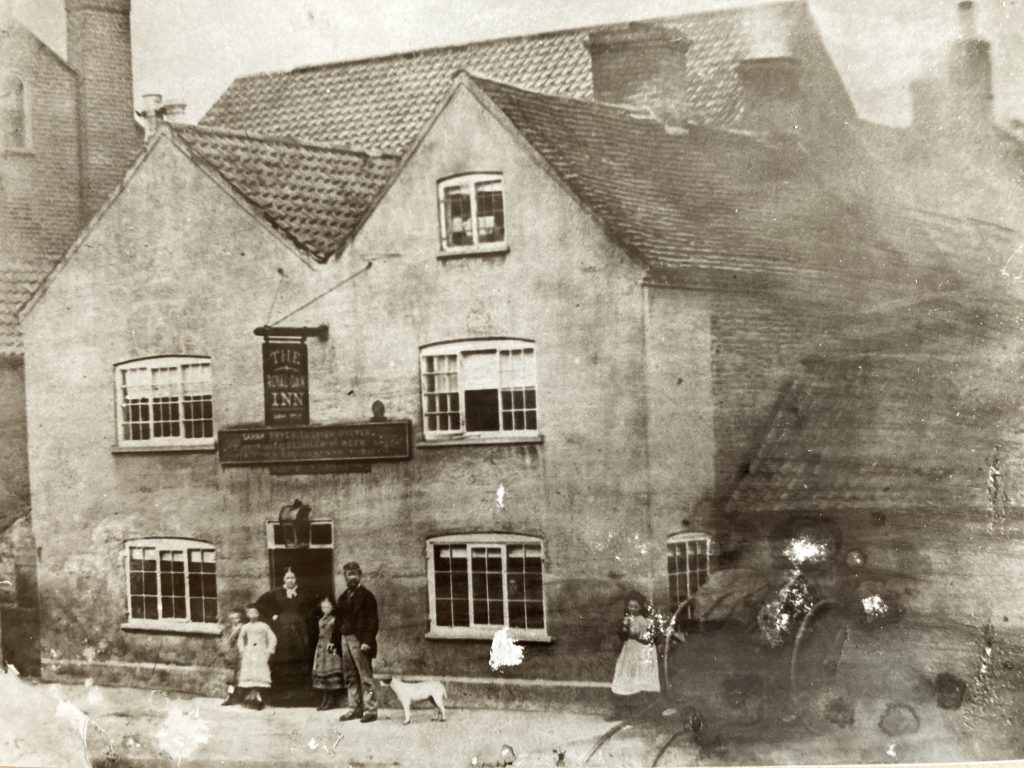 There is no record of the immediate landlord after Sarah but we can assume that the family rallied round and helped until the eldest son John was able to take it on.

John Fryer was born in 1867 in Radcliffe.  He is recorded at The Royal Oak in 1891 where he was running the pub with his two sisters Anne Elizabeth and Rosa.  However he transferred the licence to Joseph Webster  in February 1892.   John put up the family blacksmith business for sale in 1892: it was bought by John Henry Hallam.

John Fryer had moved to The Ferry Inn at Wilford by October of that year (perhaps he wanted to gain more experience of the business by running other public houses). In 1894 he is recorded as requesting the transfer of the license of  The Black Lion from Mrs Fanny Dudley to himself, so we can assume he ran this other village pub until he returned to the Royal Oak in 1902.  John married Florence Stevens from Codnor in Derbyshire in 1896 and they had one daughter Florence Rosa born in 1899. 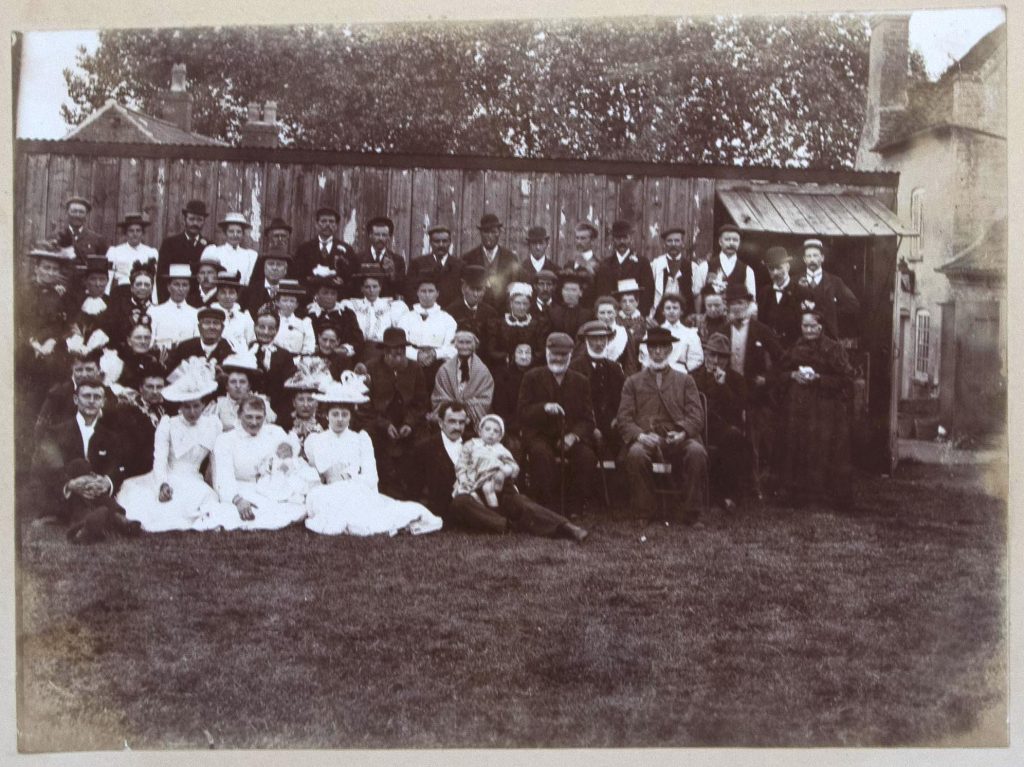 At the rear of Royal Oak – the christening of Rosa Fryer

In the 1911 census John and his family are recorded as living at The Royal Oak and it had six rooms. They shared the pub with Frederick Hallam, (nephew of Sarah Fryer), a brewer,  and Mabel Greaves a servant. John was captain of the village cricket club for twenty years, retiring shortly after the end of the First World War; he also played for the local football club. 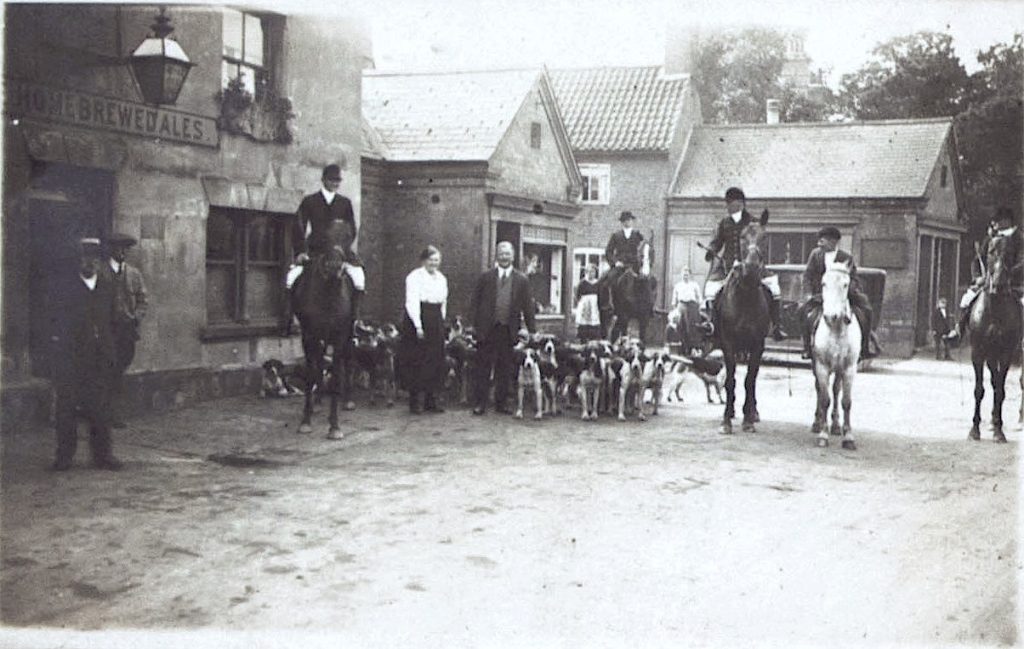 Jack and Florence with the South Notts Hunt

The Royal Oak was put up for sale in 1933 (see newspaper notice below).  An article in the Nottingham Evening Post dated 11 February 1933 said about the forthcoming sale of the pub –

Probably one of the most interesting sales of the year will be that of the ROYAL OAK in Radcliffe on Trent which is to be offered for sale this morning.  The life-long tenant Mr J Fryer needs no introduction to readers.  He has completed his 35th year of occupancy and retires from business early this Spring.  It is interesting to note that this is the only free house in Radcliffe, and one wonders who will be competitors to the existing breweries in the village, which during the past few years has grown exceedingly popular as a residential suburb of Nottingham.

John and Florence moved to Beech House on Richmond Terrace before finally retiring to 57 Shelford Road, Radcliffe on Trent where he died in 1947 at the age of 80 years and Florence died in 1953.

Edna Saxton’s father, Joseph Saxton, bought the Royal Oak for £2,300 from John Fryer in February 1933 and his daughter Edna is recorded in the 1939 register as manageress. She married John Redgate later that year and he took over the license.  They had a son Michael J L in 1942 and he was to take over the license together with his mother in 1968. His father died on 11 July 1969.  John was known for his lugubrious expression, not exactly the jovial landlord one expects in a local pub! Michael continued to run the pub together with his wife Susan and was responsible for the many alterations that allowed the pub to progress from a purely drinking establishment to a place to enjoy eating out with family and friends.  Edna Redgate died in 1996. 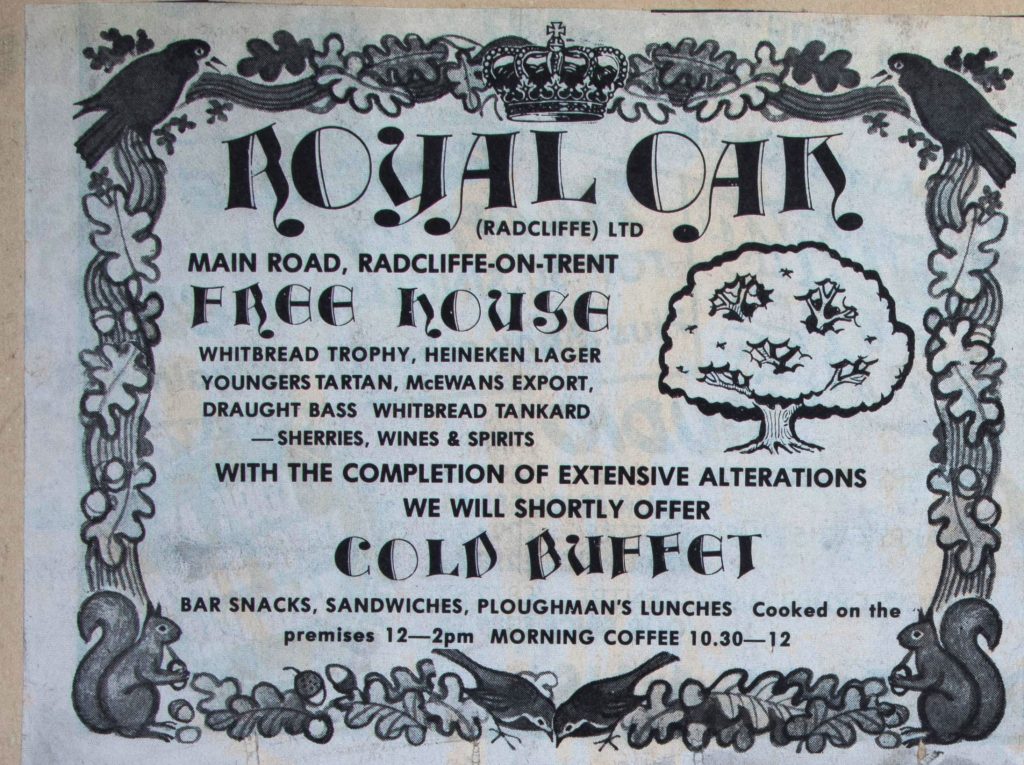 1851 – The railway contractors celebrated the completion of all work on the railway line from Nottingham to Grantham by giving their workers’ a most excellent dinner’ at the Royal Oak.

1878 – A clamp-down on illegal drinking in the village was undertaken on 19 May. (Licensing Act of 1872 stated that Sunday opening times were 12.30-2.30 and 6-9p.m. Bona-fide travellers were classed as being at least 3 miles from home and could expect to be served outside normal hours.)

Police Constable Wilson reached the Royal Oak at 11a.m. to find the door closed but not locked. On entering he found 15 men drinking in the tap room.  He was served two cans of ale by Sarah Fryer’s brother with no questions asked.  He also repeated the performance before 6p.m. that evening. In the defence case it was stated that Wilson was a traveller but this was dismissed as he had not been specifically asked where he had come from before being supplied with beer. Sarah was fined £5.

1882 – Sarah Fryer allowed the pub to be used as a vaccination clinic (smallpox).

During the latter half of the 19th century and early 20th century the Royal Oak hosted auctions of property and inquests. Click here to read the details of an inquest held in The Royal Oak in 1903. 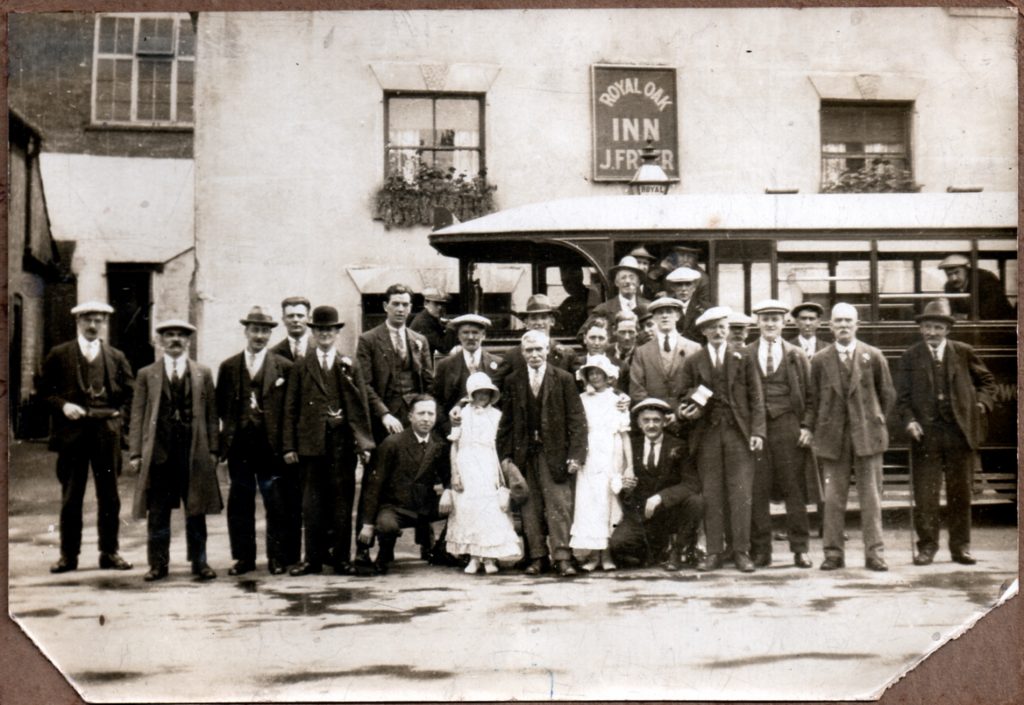 In 1936 the floods in the village had the water lapping at the ground floor windowsills. 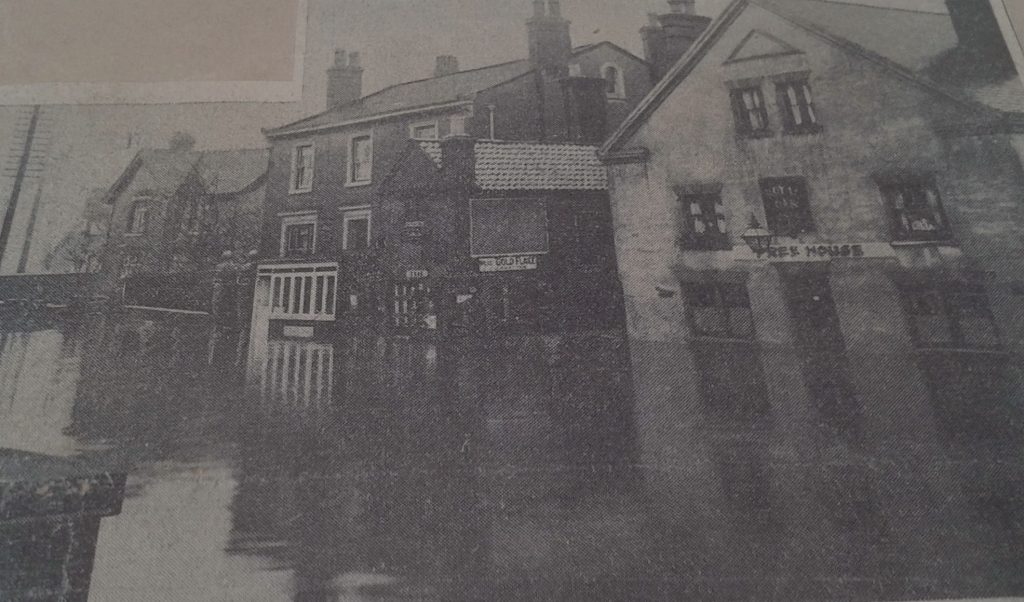 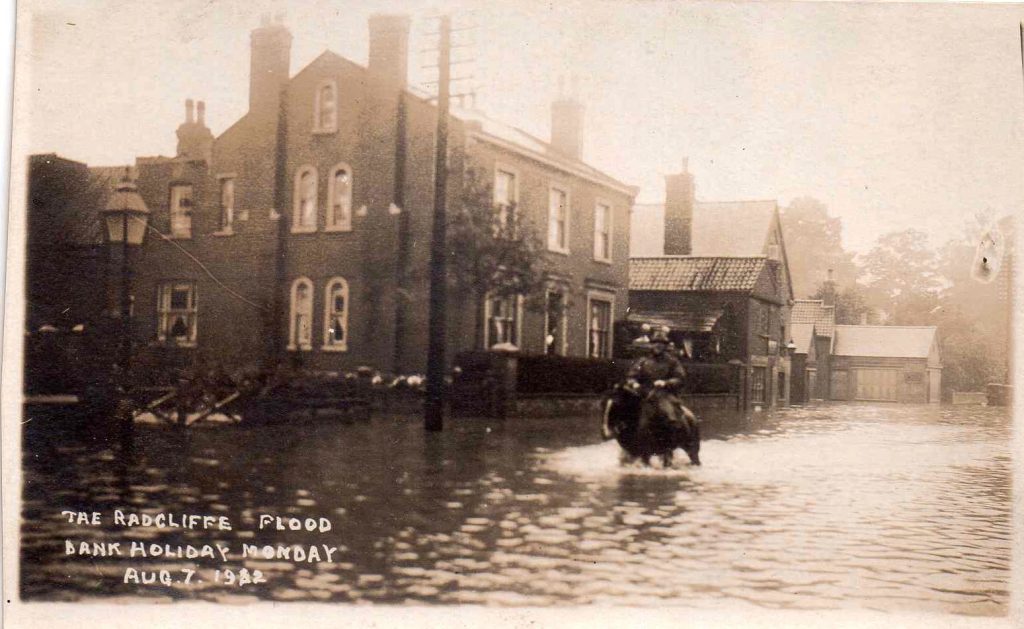 A previous and similar flood in August 1922

During the Second World War the pub was frequented by RAF personnel.

Landlords had always brewed their own beer and the brewery was located behind the pub. When the Redgates were there they had a vat capacity of 300 gallons in the rear outhouse.  Harold and Beatrice Gibson who both worked for the Redgates took £208 in one evening which was quite memorable as beer was only 1 shilling a pint at that time.

In 1955 the public bar acquired beams and the back bar became a kitchen.

In 1978 more alterations took place, this time with the demolition of the corner shop, once run as a grocery shop by Mr and Mrs J Foulds and later on Mrs Rowe’s sweet shop, together with the old brewhouse and yard where the beer for the pub had been brewed.  On the other side of the pub was a butcher and slaughterhouse originally belonging to the Foster family and then Charles A Martin.  It took 5 months to complete, resulting in additional accommodation of a kitchen and extended lounge bar to provide much needed catering facilities.  Michael was quoted as saying ‘I intend to build a reputation for the tasty type of food busy discerning people require, together with a wide choice of liquid refreshment’.

In the 1980s a controversy over the use of the pub’s car park was reported regularly in the local newspapers.  First of all in 1980 Rushcliffe Borough Council hoped to persuade Mr Redgate to allow the use of his car park in order to ease the village’s chronic parking problem and in 1981 he agreed to allow 22 spaces in the middle of the car park for public use. However by 1983 the council were having to discuss this issue with Whitbread Brewery and originally they agreed to allow full public use of the car park for 20 years, the maintenance costs being shared, but in 1984 the brewery had a change of heart and by 1987 the brewery planned to erect a barrier at the entrance to deter shoppers and long-term parking.

In 2009 when The Moleface Pub Company took over it became The Royal Oak Pub and Kitchen and received many good reports for excellent food. In 2016 it came under new management and then in December 2019 Chris Farman became the manager. The building is currently owned by Enterprise Inns. 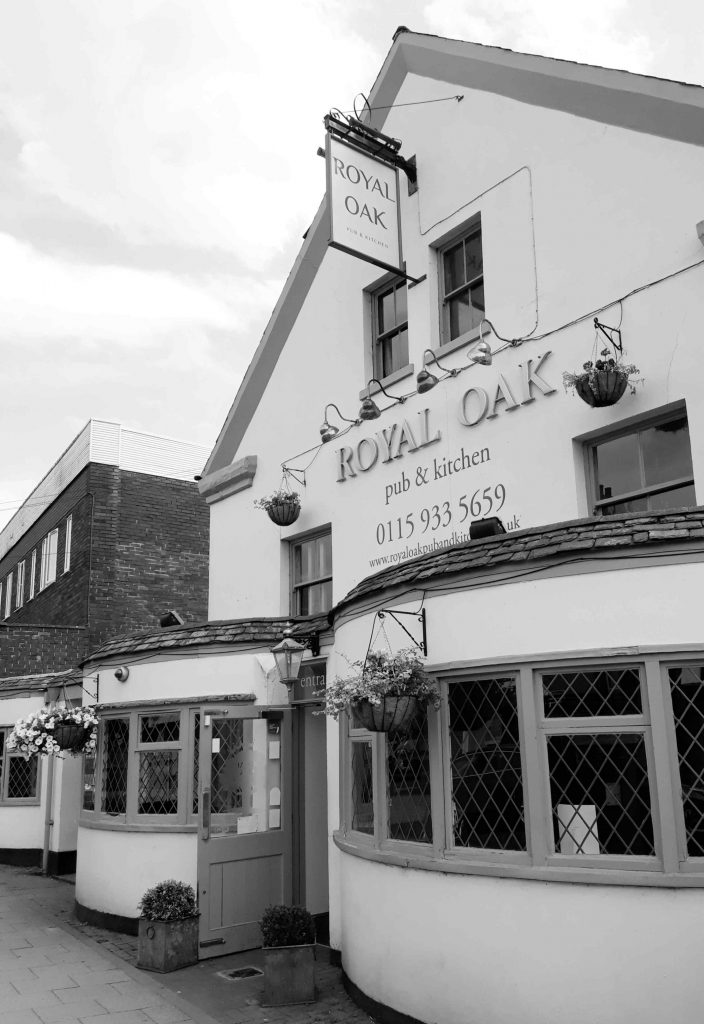 The Royal Oak after recent modernisation 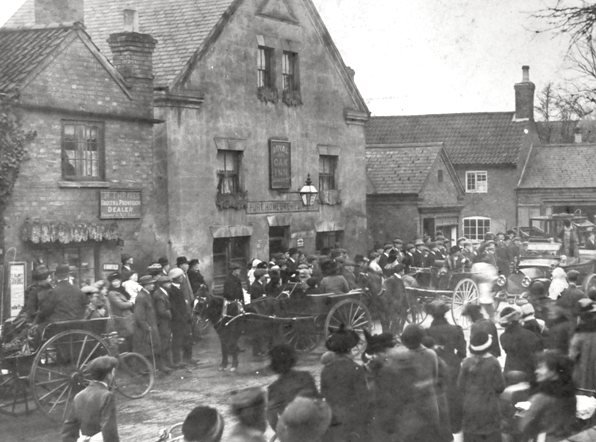 Possible recruitment drive for the army