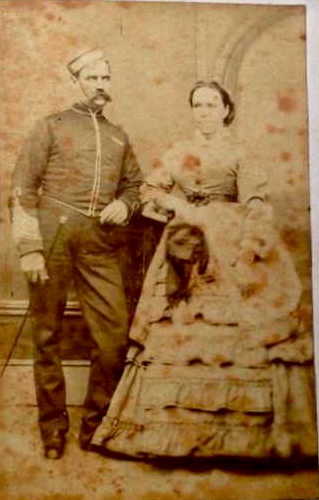 In 1851 William joined the 4th Light Dragoons as a Farrier, service number 1484, serving in India and subsequently the Crimea where he served in Alma, Balaklava, Inkermann and Sebastapol. His Chelsea Pension record confirms that he had served 24 years and described him as 5ft 9½ins tall with blue eyes. 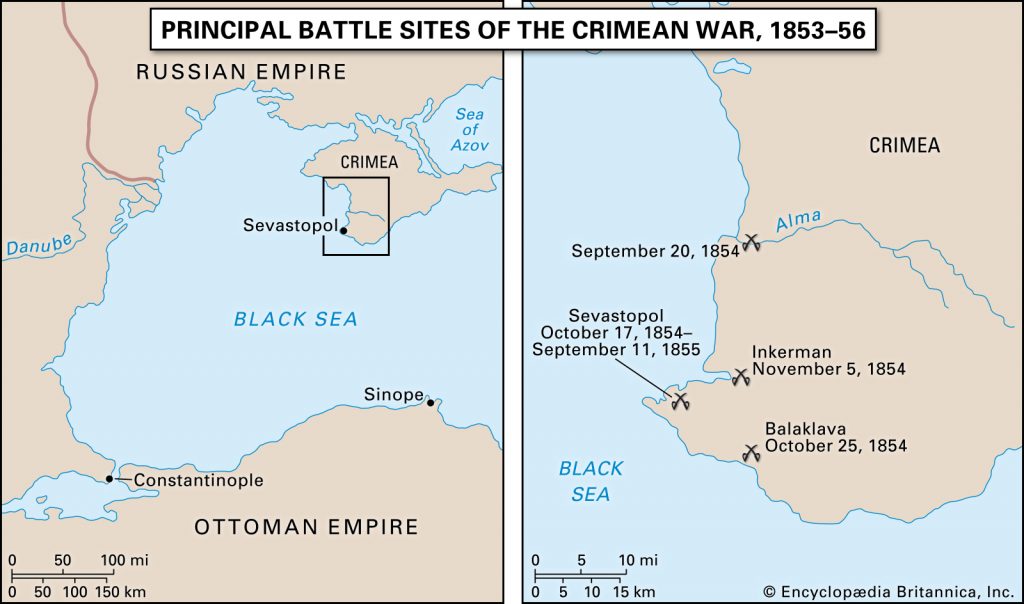 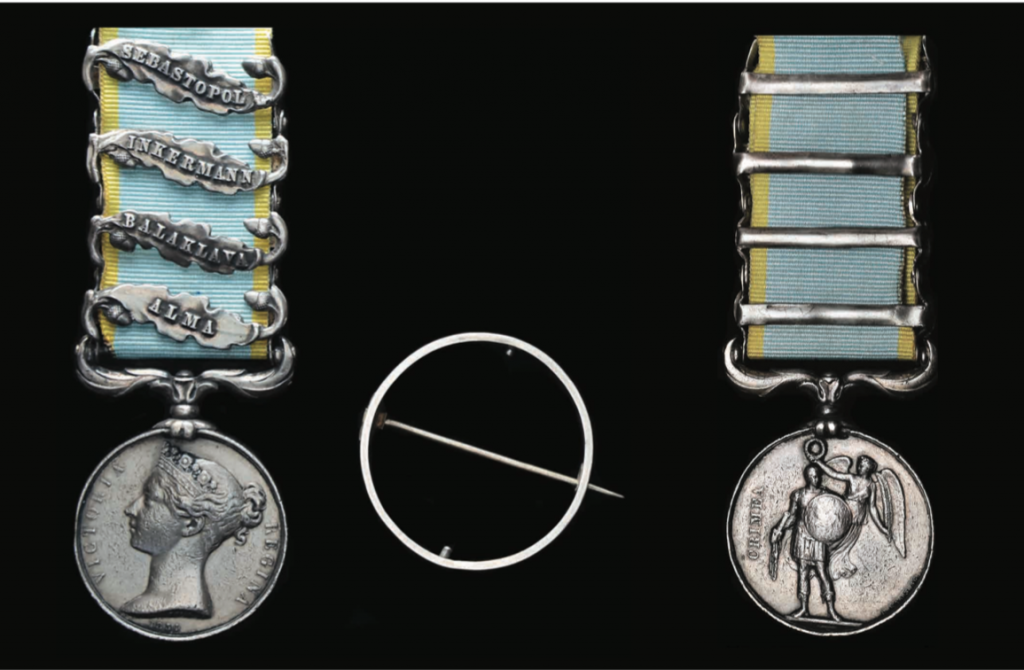 William wrote the following letter to his sister Harriet which confirms his involvement in the Charge of the Light Brigade. (Original below)

I now take the favourable opportunity of writing these few lines to you hoping to find you in the full enjoyments of good health as this leaves me at presently, thank God for it. Dear Sister I hope when I tell you how I have being you will excuse me for not writing to you before.

I have been very ill indeed for some time back but thank God I am a good deal better now.

Dear Sister I suppose you will have heard of the Battle of Balaclava. I was engaged there but thank God I escaped without a scratch. We were attacked about half past seven in the morning of the 25th of October. The Turks who had two batteries on the hills kept them in check for better than an hour and a half but then unfortunately they ran away after spiking* one of the batteries and leaving a good position in the hands of the Russians. However we retired a little way and the Heavy Brigade halted, fronted and charged them – the Light Brigade moving on under the French entrenchments.

The Heavy Brigade done a little mischief amongst them and as they retired the French fired a few very good shots among them.

Then the Light Brigade were brought up to the front and charged a number of guns between two hills. The enemy advanced, opened a tremendous Crossfire upon us taking the men and horses by round, 4 at a time from the ranks**. The same fire was upon us coming back as going down, we alone lost upwards of 80 men*** and a good deal more horses. I cannot at present give you any accounts of Inkerman but I will in my next letter. Let me know if you heard from London lately.

No more at present thank God but I remain your affectionate brother.

*hammered bayonet blades or steel barbs into the fuse holes of the cannons to make them unusable.

**it’s recorded that the Russians were firing cannons and rifles and all were firing by round, not at random.

***records from the 4th Light Dragoons state they lost 79 men eventually. Some were taken prisoner. 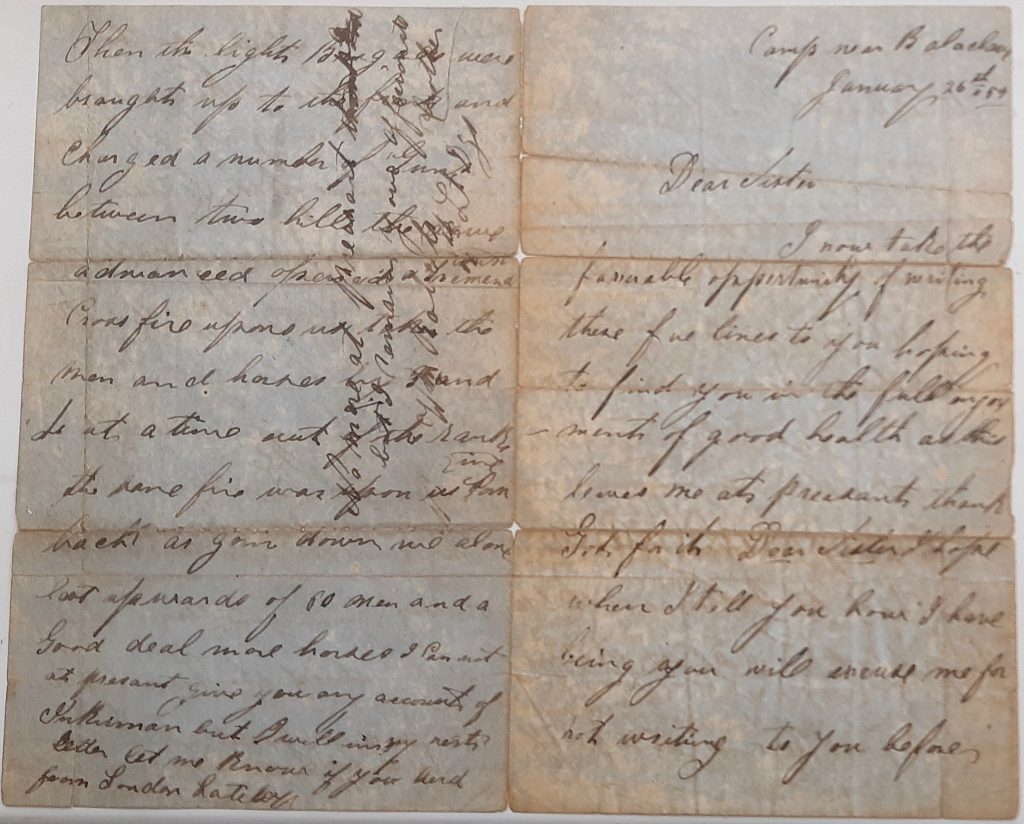 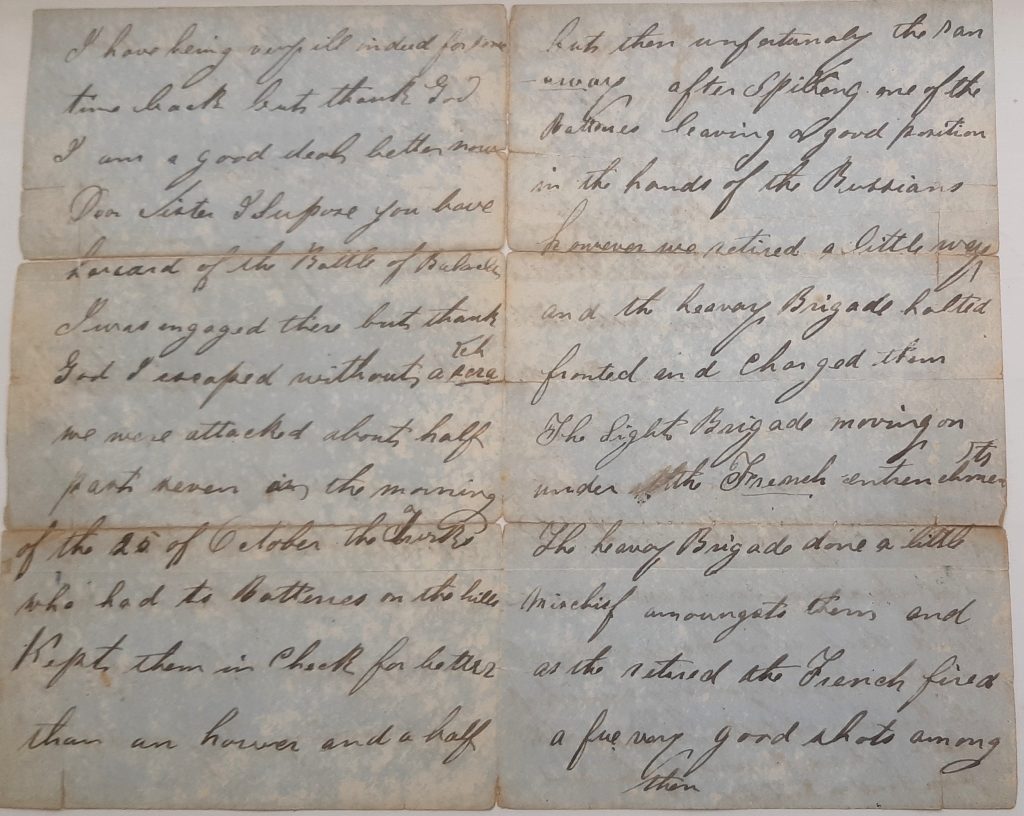 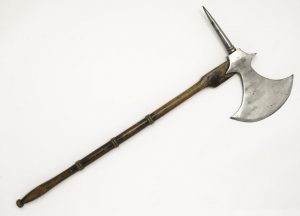 It was the farriers’ job to retrieve hooves from fallen horses after a battle; they carried axes for this job, (still carried on ceremonial occasions) which could also serve as a poll-axe  to put wounded horses out of their misery. However, on this day, Cardigan ordered the farriers not to destroy wounded horses after the charge, but rather to try to keep all the survivors alive.
“What a scene of havoc was the last mile, strewn with the dead and dying and all friends. Some running, some limping, some crawling; Horses in every position of agony, struggling to get up, then floundered again on their mutilated riders!” britishcavalryregiments.com 4th Hussars. 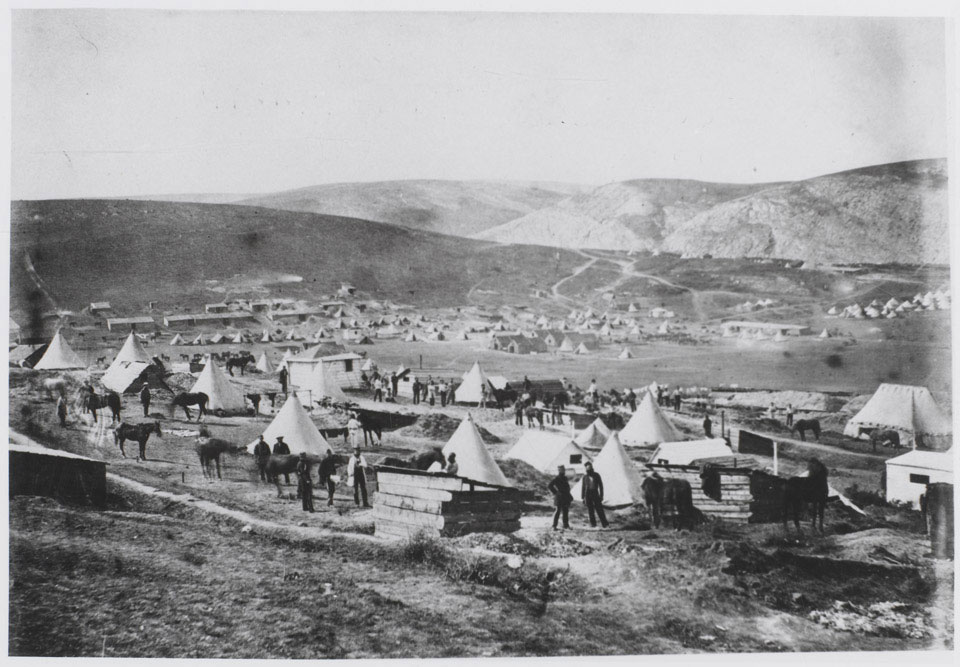 By 1857 William had returned to UK and married Jane Pepler in Trowbridge; they had 5 children, 3 of whom died in infancy. However when William became a Chelsea Pensioner on 2nd March 1875  he appears to have moved back immediately to Radcliffe to live with Harriet, the sister closest in age to himself and to whom the letter above is addressed, and her husband Samuel Pike. At that time they were either still  living on Henson Lane on one of farms owned by Henry Smith of Cropwell Butler or they were living at Lees Farm. Certainly by 1881 the family including William were at Lees Farm, Radcliffe on Trent. Jane, his wife, was still alive in 1911 according to the census and living with their son George.

His obituary in the Nottingham Evening Post of Saturday 30 May, 1885, records the following: 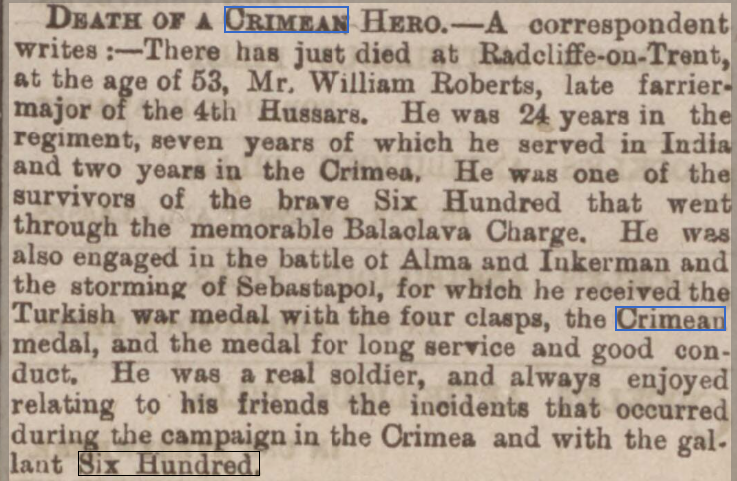 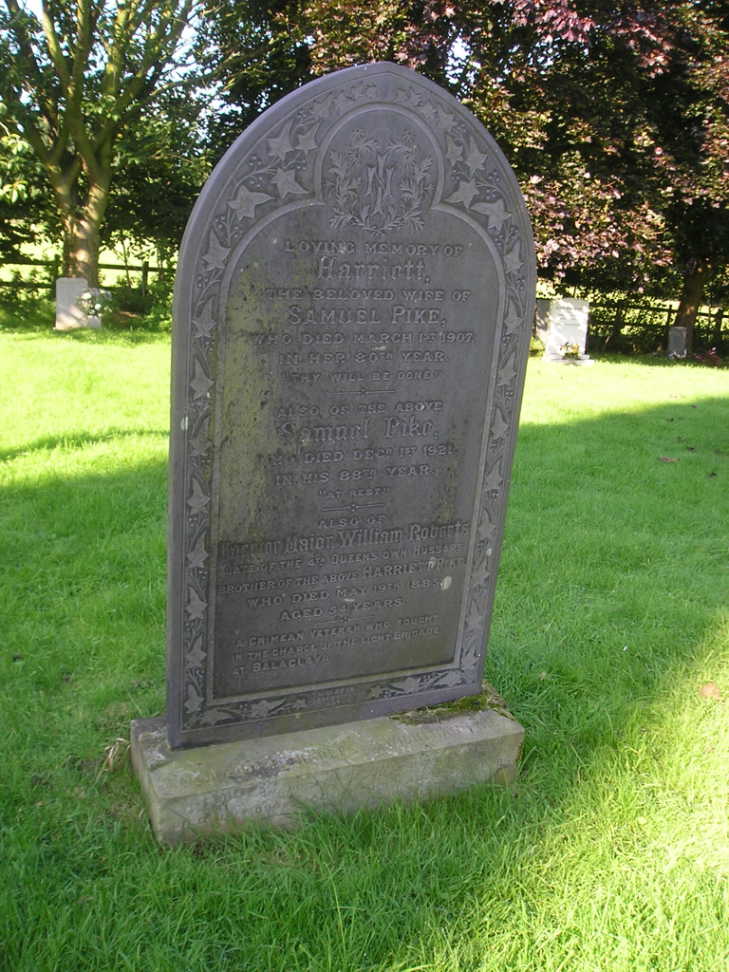 Gravestone in Holme Pierrepont churchyard for Harriet and Samuel Pike
Also, Farrier Major William Roberts, late of the 4th Queen’s Own Hussars…who died May 19th 1885, aged 54 years, A Crimean Veteran who fought in the Charge of the Light Brigade at Balaklava.

William’s two surviving sons followed in their father’s footsteps and both served in the army. George, who was a musician in the Wyndham Theatre, returned to serve in WW1 and is described as having a horses head tattoo on his arm.