From Wharf to Weir

a history of the River Trent at Radcliffe 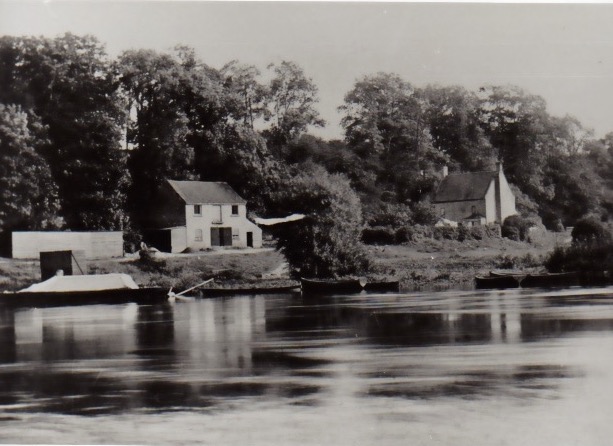 The river forcing its way alongside the red cliffs has given Radcliffe on Trent its name. The Celts had named the river Tristanton or Trespasser and over the centuries its banks have been eroded and its course changed. From early times it has provided a trade route and has been important for fishing. In the Domesday survey of 1086 it records half a fishery and a third part of another in the Radcliffe manor held by William Peverel while other records refer to salmon, barbell and eels caught locally.

It was a busy transport route and although there is no evidence of the existence of a wharf, in the 13th century Radcliffe people would have found work opportunities, hauling barges and providing thirsty bargemen with ale. Willows were grown beside the river and many villagers were recorded as basket-makers. It was also notoriously treacherous and records show that drownings were frequent, examples being; William Upton who lost his son in July 1863 and Francis Wright aged 7 drowned while bathing with friends in July 1880. John Hainsworth Barry, well known throughout the village, was awarded the Royal Humane Society’s certificate after saving the life of Oswald Bolton in the River in June 1910. Click here to read about the rescue of Clifford Daniel.

The Wharf and Ferry

A wharf was reputably built in 1779 and with general improvements by the Trent Navigation Company river trade increased. A 1782 map of the Trent Navigation Company shows a coal wharf at Radcliffe and considerable trade in Crich Lime is recorded in newspapers from the end of the 18th century. Boats appear in probate records and magistrates were keeping a strict eye on river traffic, due to the lack of vigilance in stopping movements of boats on a Sunday. There were no bridges between Newark and Nottingham so ferries were the main means of crossing for the villages along its banks. A wharf house was built here in 1820 and Edward Parr rented the main part of the wharf and operated a ferry service. 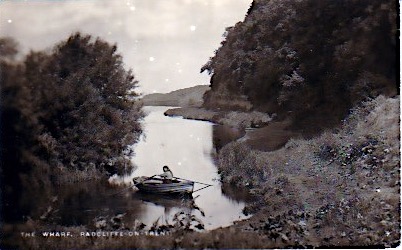 The ferry operated between Radcliffe and the far side of the river for access to Stoke, Carlton and Gedling, becoming the focus for the wharf area with the Upton family taking over the operation from Mr Parr. By 1925 the Vickerstaff family were the operators. In 1936 Sam Rose took over the tenancy of the ferry house and also continued operating the ferry, still charging one penny per single trip. Teas were sold at wharf house and in the summer visitors from all over would come by train, road or river to visit at weekends. People would swim in the river, hire rowing boats and take a trip along the river on one of the steamers. The river had treacherous currents, and an undertow of which a ferryman was always conscious. The wharfside was sold in 1941 as part of the Manvers Estate sale but one of the conditions of sale was the maintenance of the ferry service. The ferry ceased to operate after the second world war and the former wharf area is now covered over with a small estate of mobile homes.

Change of course of the river

By the mid-16th century the course of the river at Radcliffe had dramatically changed. In earlier times it had flowed north of an area of grazing land known as the Hesgang or Eastgang Pasture (this land became part of Stoke Bardolph after the first world war). From Tudor times however, the river swung southwards so that the Hesgang pasture could be reached from Radcliffe by boat or ford. As long as water levels still allowed cattle and drovers to ford the river to reach the marooned pasture the situation was manageable. From the 1570s however, Sir Thomas Stanhope of Shelford had built a weir nearby and this was said to have harmed a number of riverside villages. Here at Radcliffe the water level had risen and cattle were expected to swim rather than walk to the Hesgang. This area was then prone to flooding. A reprieve was given when the weir was destroyed in 1593. The ford became passable again as routes through the water are shown on the enclosure map of 1790.

The path called Halliwell or Hollow Well which runs down the cliff opposite the park gate passes a spring known as the Holy Well, which then leads onto a riverside path taking you past the lily ponds to the weir. This in turn leads to Slack Hollow an area of deciduous woods which takes you back to the cliff walk. This wood was cleared by volunteers working for the British Trust for Conservation in 1997. The clay soil had been washed down the slopes eroding it away. Railway sleepers were used to shore up the steep slopes at the edge of the bank going down to the river. The path was then widened and timber fencing put up for safety reasons. The journey to the weir and lily ponds was now much easier. There is now a pleasant riverside walk along the meadow with its natural ponds and reed beds.

This area was known as Cliff field and was 20 acres in size. In the 16th century records show that Sir Thomas Stanhope of Shelford owned this part of Radcliffe with the local squire John Rosell paying a rental of 7d per year. Cliff field/ pasture where the lily ponds are located was divided up between Charles Pierrepont and Jonas Bettison after the 1790 enclosure act. 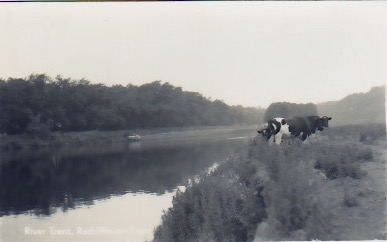 On this land between the river and lily ponds, cattle could be seen well into the 20th century and many villagers can recall seeing them. They would have been driven there along the riverside path from the direction of Shelford or as some people remember on flat bottomed boats or barges transporting cattle along the river to reach the pasture. The river by the weir has always been popular for fishermen even to the fact of sightings of salmon leaping up the weir. The weir was constructed in the 1890s whence the character of the river changed.
In the Manvers sale of 1920 arable and pasture land including cliff and half river was sold to Mr A Ball and tenanted by George A Bell who lived in Manor farm on Shelford Road and also ran the Manvers Arms.

A number of maps of the area show that the lily pond or ponds have changed shape over the years. One map indicates that there was no access from the cliffs to the pond hence indicating that it was once part of the river. Later ones show it has two distinct ponds and then the 20th century map shows a large pool and with two forks with a raised piece of land between them as now. The Nottinghamshire Biological and Geological Records Centre lists the lily ponds or one of the ponds and was called Avenue Pond as a site of importance to nature conservation. This large pool situated between the river and cliff woodland is possibly an old gravel pond. Habitats associated with the pool include Willow Carr, tall herb vegetation and grassland. The submerged aquatic vegetation in the pond is dominated by rigid hornwort. The floating leaves of yellow water lily and fringed water lily are locally abundant. This site supports water birds such as coot and moorhen with peacock butterflies and dragon flies. No definitive records are available indicating that the lily ponds were a result of gravel extraction or a remnant of the old river course.

The area has been enjoyed by the people of Radcliffe for a number of years but very few remember seeing lilies actually on the ponds. Early 20th century reminiscences are of skating on the ponds in the winter and swimming in the summer with a picnic by the pond at any time of the year. Now the parish council have purchased the area it is hoped that the village of Radcliffe on Trent will continue to enjoy this attractive area of land. 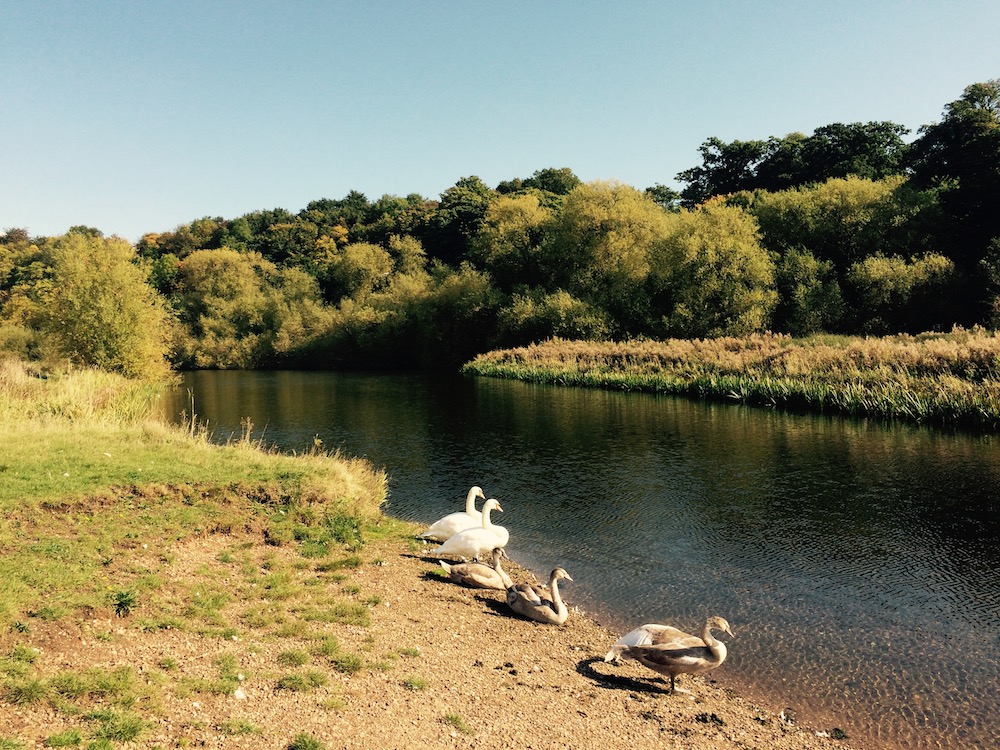