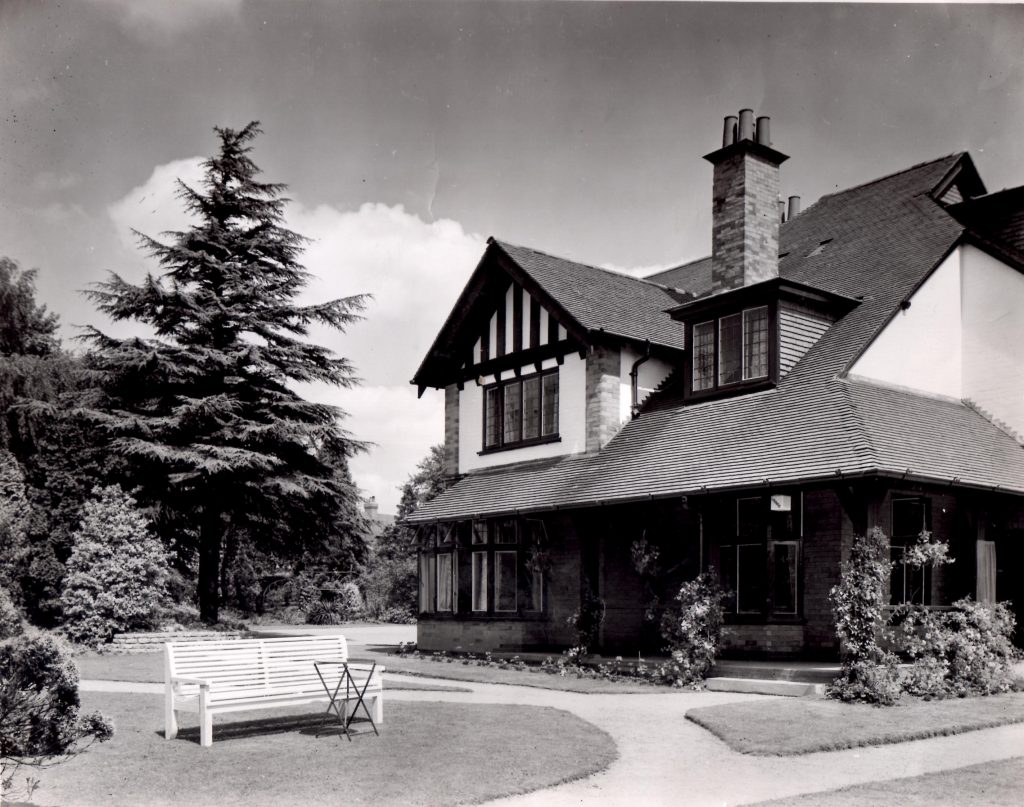 Northolme House located at 64 Shelford Road was built around 1908 by Charles Wright Gowthorpe. There is a record of him making a planning application to the Parish Council on 10 February 1908 to build a new house on Shelford Road. 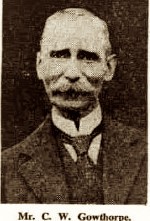 Charles Wright Gowthorpe was born on 10 July 1861 in Nottingham and lived on Arkwright Street with his parents Edward Landell and Annie Gowthorpe.  His father was an engineer’s furnisher.

By 1891 the family were living at 90 Sherwood Street in Nottingham and Charles was employed as an ironmonger’s apprentice; he also had a sister Mary.

Charles married Amy Danks on 27 September 1887 at All Saints Church in Nottingham. According to the 1891 census Charles and Amy had moved to Lorne Grove, Radcliffe on Trent, where he is recorded as an engineer’s furnisher and merchant, like his father before him. Living with them was Amy’s sister, Kate Spencer and they also employed a servant Martha Gardener. He took over the running of the company E L Gowthorpe and Son, which had been founded by his father in 1858. Charles retired in 1946 at the age of 85.

In 1901 they were still on Lorne Grove, however a record exists of them living at Northolme in 1910 and certainly in the 1911 census they are living on Shelford Road with 2 servants.

Charles was a former athlete, being a championship holder in the 120 yard hurdles, also a member of the Nottingham Boat Club, of which he later became president. He played football for Nottingham Forest when it was purely an amateur eleven. Charles was also very active in Nottinghamshire Masonic circles, eventually becoming  Provincial Grand Master for Nottinghamshire, a position he held from 1941.

Many local villagers have recollections of the Gowthorpes; some remember Charles walking in a stately manner to the railway station where a porter would be holding the first class carriage door open.  His business premises were located on London Road.  Others recall Steve Loach, the local chimney sweep, assisted by Laurie Bainbridge, looking after the extensive gardens belonging to the house, which seemed to stretch down towards the railway. The front was behind trees that hid the house from the road (and blocked the view of the council houses opposite).  Sheep were grazed in the field, now under Wakefield Avenue. Another recollection was of an open top car (not sure of the model) red in colour, with Mr Gowthorpe driving in the front complete with leather helmet and gauntlets with his wife in the back seat looking very much like Queen Mary with a large hat and veil.

Charles died on 31 January 1949, his wife Amy having died previously on 24 October 1948.  There were no children. In his will he left  over £5 million and one his many bequests was £1000 to the Radcliffe branch of the British Legion.

The sale of Northolme was held on 30 March 1950  and the following advertisement is from The Nottingham Journal 11 March 1950:

By order of Lloyds Bank Ltd (Executor and Trustee Dept) and others. Executors of C W Gowthorpe deceased.

are instructed to sell by auction at The Black Boy Hotel, Nottingham on Thursday 30th March 1950, at 3 p.m. (unless previously sold by private treaty).

A substantially built and attractive Freehold Country Residence known as  NORTHOLME, Shelford Road- with gardens and paddock – in all about 6¾ acres.

This is a medium sized residence with excellent accommodation.  The principal rooms face south and enjoy delightful open views.

The outbuildings include garage, stable and greenhouse.

The gardens are beautifully laid out and well screened with trees.  They include tennis court. kitchen garden and orchard.

There is a paddock to the west of the property which is let on an annual tenancy to Mr Lambert at £15.

of  the house and gardens on completion.

An advertisement in the Nottingham Evening Post dated 8 April 1950 was for the sale of the furniture belonging to Mr Gowthorpe:

Walker, Walton and Hanson will sell by Auction in a marquee on the premises on

some excellent jewellery, glass, decorative porcelain, carpets, books and a safe by

Thomas Perry.  A small collection of oil paintings.  Outside effects and an

It is interesting to note that in the Newark Advertiser, dated 25 October 1950, a notice appeared  stating that 5½ acres of land on Shelford Road, on which Home Brewery Co Ltd were planning to build a licensed premises, should be acquired compulsorily for housing purposes.  This land was eventually given over to housing and it can be assumed that Home Brewery actually bought Northolme as in The Nottingham Evening Post dated 30 December 1950 the following notice appeared:

Proposed conversion of premises at Shelford Road, Radcliffe on Trent, for use as licensed premises.

The Nottinghamshire County Council have received as Planning Authority an

application for the conversion of premises known as “Northolme” Shelford Road,

Radcliffe on Trent, from an existing residence to licensed premises.  Persons desirous

of the fact by the 12th January 1951, and any such observations received by me will

be considered by my Council before the application is decided.

Director of  Planning, Shire Hall, Nottingham, or at the Office of the Surveyor to the Bingham Rural District                 Council during normal office hours.

Clerk of the County Council

Northolme House was licensed in 1952, taking the licence from The Red Lion, located on Water Lane. The first landlord was Mr Chisholm, followed by Mr Beckett, the Len and Beryl Owen in the 1960s and Graham and Sylvia Wilson during the mid 1970s to 1980s. Others included a former Nottingham Forest footballer and Marianne Bland (2000-2005) – photograph below. 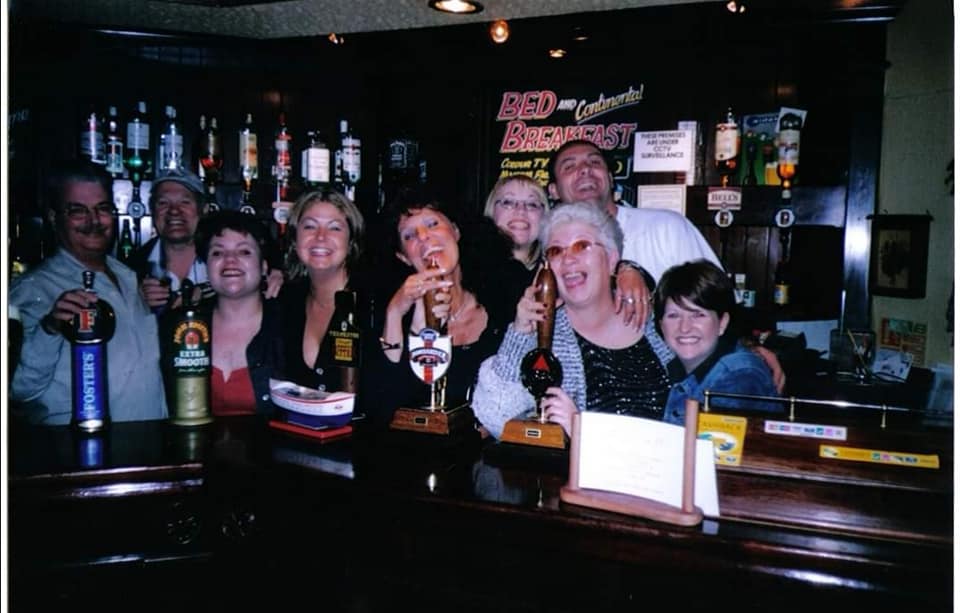 Many people will also remember the layout of the pub, having a small entrance bar, that seemed to be exclusively used by members of The Trent Tipplers (an off shoot of the Radcliffe Golf Club), a lounge bar and a large public bar. 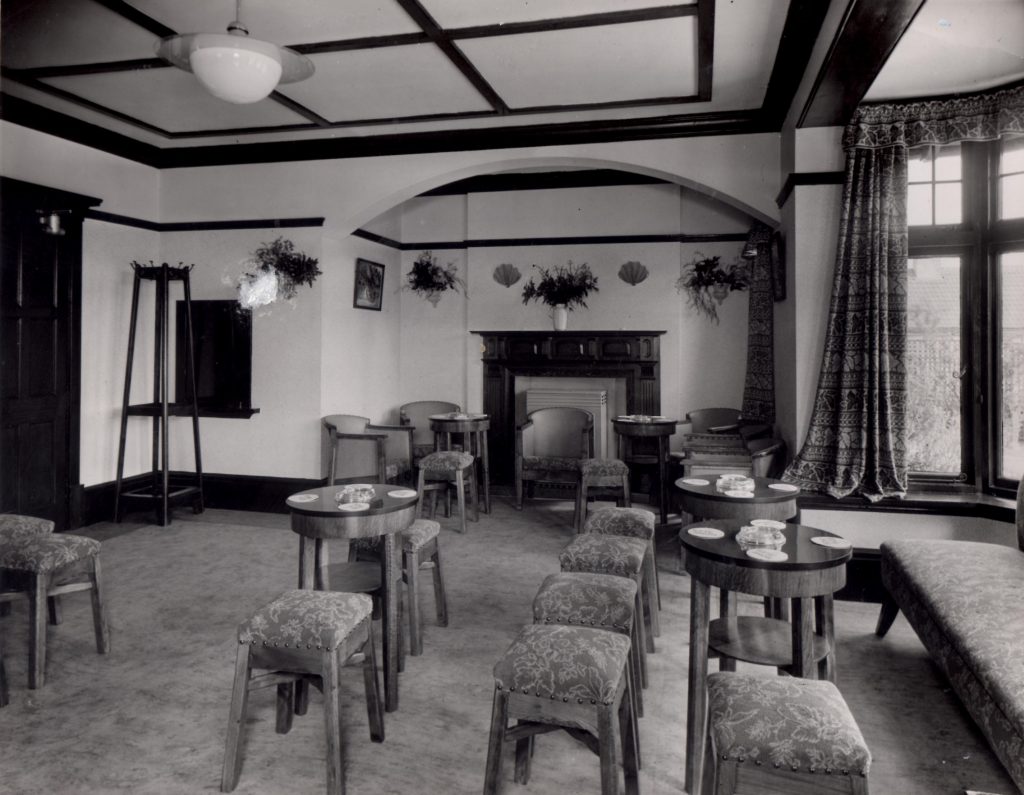 It has had a number of changes of name, from the original Trent Hotel, to the Sixty-Four (a sports bar), The New Trent and currently The Radcliffe. In November 2017 it was refurbished by The Red Star Pub company but it wasn’t until 2019 when the Secret Pub Company took over that it became an award winning gastro pub.