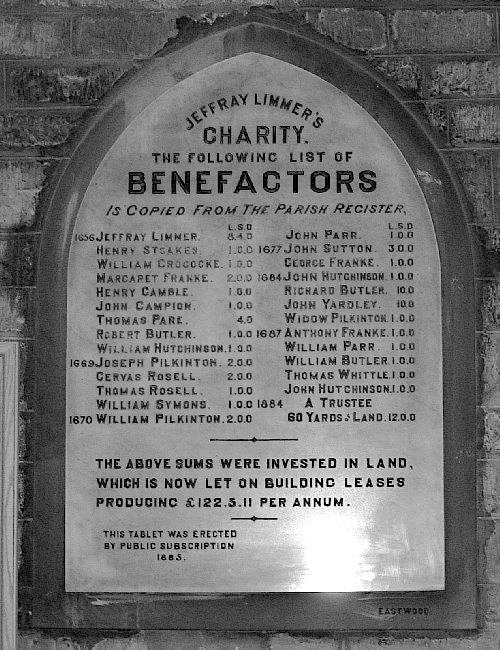 The oldest charity for the village is known locally as ‘Jeffrey’s Dole’ which was originally started with a £10 legacy in the will of Geffrye Lymber, a wheelwright and churchwarden who lived in Radcliffe.  The bequest was made in his will dated 17th April 1617. His son William had predeceased him and it was thought that this may have influenced the unusual and generous gift for ‘the relief of poverty and sickness’.   Other smaller bequests were made between the years 1636-1687 by several benefactors and details of these can be found on the marble tablet erected in the church in 1885 and located just inside the west door of St Mary’s (see picture above).  The money left to the poor was managed by the churchwardens who lent out money at interest.

About 1718 the money was invested in open fields, for lending at interest had not proved to be sufficiently profitable.  The original land purchased was scattered over the four great fields; Stoney field, Cliff field, Breck field and Sunpit. The total area was 4 acres and 15 perches. All the letting of this land was done at parishioners meeting and the rents received by the Overseers of the Poor.  One half was distributed at Christmas amongst the poor widows and old people of the parish, each receiving 5 shillings.  The rest was reserved for the poor in case of sickness.

When the fields were enclosed about 1790 the poor’s scattered strips were exchanged for an allocation of land on Bingham Road.   From 1877  the trustees realised that the poor’s land could produce more profit by house building than by letting land for grazing or growing. This land in ten lots was sold at auction in December 1877 with a leasehold of 99 years. Specific requirements on price, size, and quality of materials used on the houses were stipulated. The ground rent collected was then distributed to the poor.   At the time the land was sold it had only been yielding an income of £24 per annum. 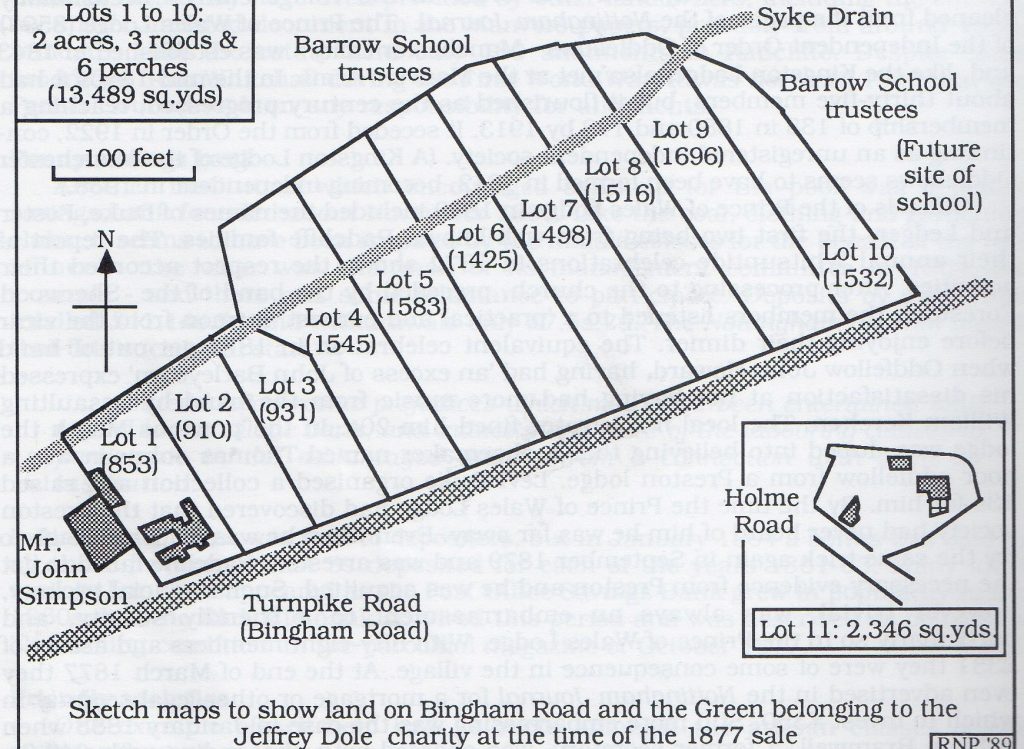 A revision and updating of the charity was approved by the charity commissioners in 1880 and a governing body of trustees was appointed. It was administered by nine Trustees, including the Rector, two churchwardens, two representatives of the Overseers of the Poor together with four other persons who must be property owners. Once the administrative costs of the charity had been met the first call on its income was educational.

Any income over £30 was to be used to provide for the physical needs of ‘deserving of necessitous bona fide residents of the Parish’.  The implementation of these new guidelines did not meet with wholehearted approval.  At a meeting of the village Vestry in March 1881 it was reported that ‘several ratepayers criticised the manner in which the Jeffrey Dole Charity had been distributed during the late winter’.

Once the administrative costs had been met it was agreed that education in the village would have first call on its income.  The first £30 was to be set aside to further education of the poor children of the parish.  A maximum of £10 was to go towards tuition fees and £5 was to be available for prizes to a maximum of £1 each. 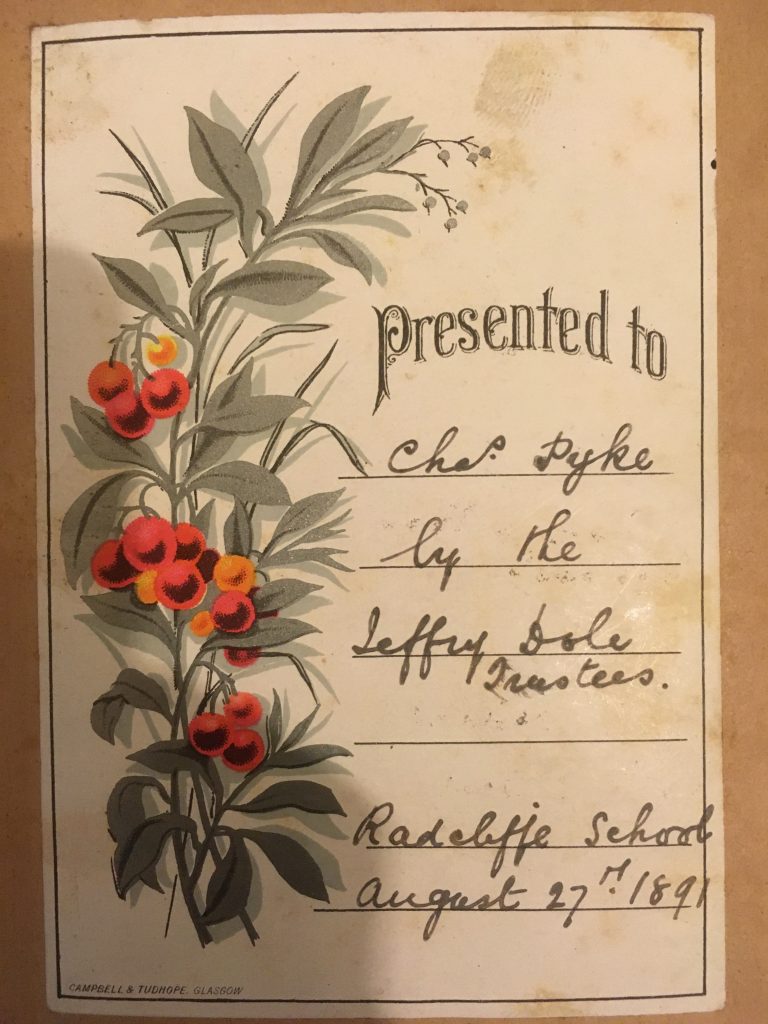 Alternative uses of money included a £5 contribution towards the maintenance of the school and 10 shillings towards the provision of evening classes or towards prizes for those attending them.

In 1904 the educational side of the charity was hived off to become the Educational Foundation of Jeffrey Limmer and Others.  The school log books refer to the distribution of prizes by its governors, initially at the end of August, but more often in September. The school managers, in an attempt to improve attendance at school, used money from the charity as an annual prize of £5 to be divided amongst the scholars with the most attendance in the past year. 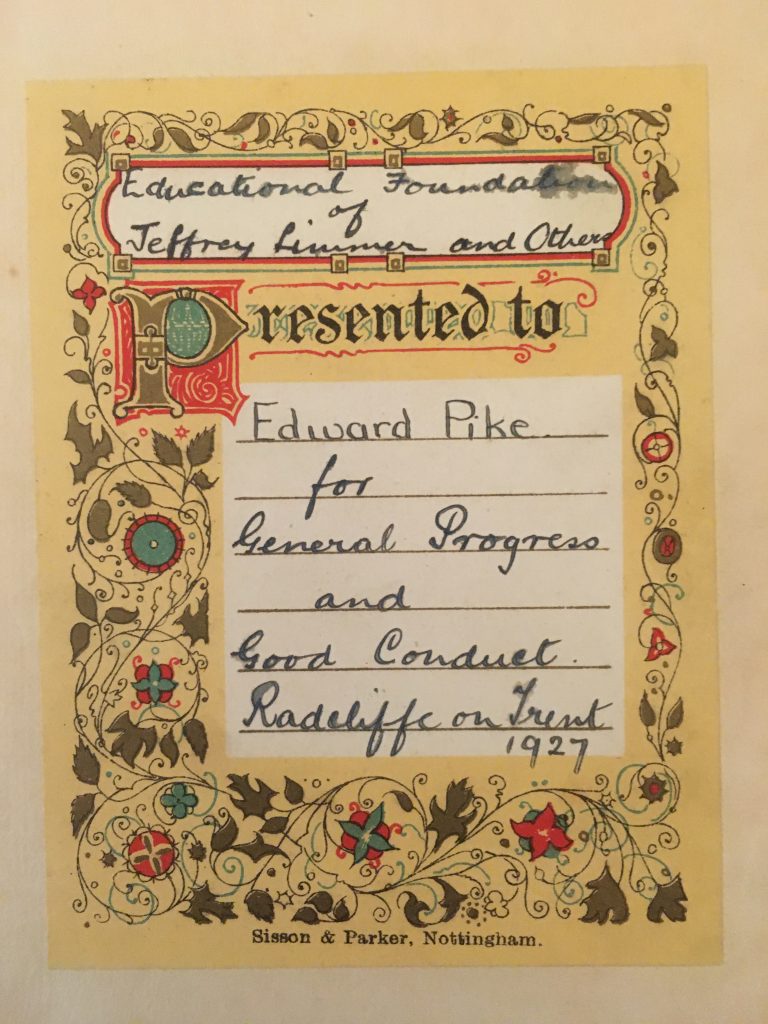 ‘Wonder Tales from Many Lands’ presented to Edward Pike age 7

The main beneficeries continued to be those in financial need, as its founder would have wished.  After the 1880 revision, clothing, linen, bedding, food and medical items could be supplied either directly to an individual or to suitable bodies such as hospitals or provident clubs.  One of the clauses of the 1899 revision enabled the trustees to contribute between £13 and £23 towards providing a nurse or nurses for the poor, sick or infirm bona fide residents of the parish.  One example of this is when William Foster became ill, 15 shillings was paid for cleaning his house and for some nursing and then a further £15 was made available to provide him with a nurse.  Coal was also distributed- 17.5 tons in 1895 at 12s 6d a ton.  During the mid 1890s doles of 10 shillings were going to between 100 and 120 people and 5 shilling doles to 50 or 60.  However from 1898 the number receiving 5 shilling doles rose reaching 203 in 1900, perhaps suggesting increasing need. 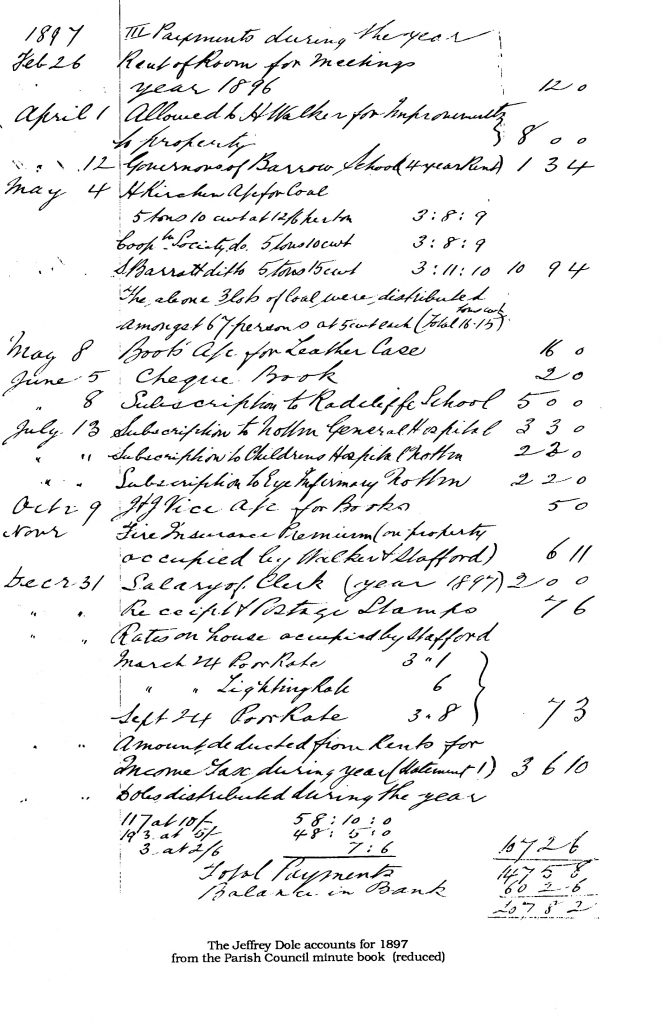 During the year 1967 the law on leaseholds was altered and the freeholds to the properties were sold to the leaseholders, who had been enfranchised.  The proceeds were invested, thus enabling the present trustees to distribute many gifts of money, mainly at Christmas time.  The recipients are selected on the basis of age and need and they must all reside in the village. Small christmas gifts are also given to each of the elderly residing in warden controlled homes in the village.

The Charity continues to this day to distribute funds to the needy of the village.

The annual report of how the money has been spent is always given at the annual Parish Meeting .

The trustees are always interested to learn of any one who is in need and may benefit from a helping hand .

The initial information you are asked to supply by email is name, address and contact number to